Grand proportions and theatrical flourish in Dublin 6 for €1.75m 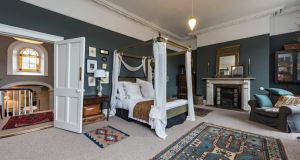 Main bedroom of 60 Leinster Road is its grandest room 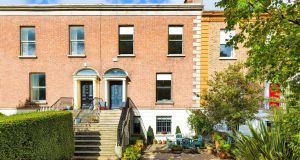 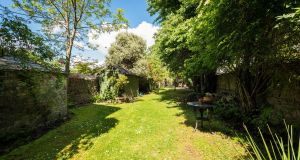 The play Six Degrees of Separation by John Guane explored the existential theme that everyone in the world is connected by a chain of no more than six acquaintances. On Leinster Road in Rathmines it would appear that houses within 100m of each other also have tight connections through their former inhabitants within the Irish theatre world.

The broad fanlight in the hallway of Number 60 hints to the wide dimensions of the interiors; this terrace has much wider rooms than its peers, and shines light on many of the framed drawings of the original plans for the Gaiety Theatre, to which the current owners have strong links. Directly across the road once stood Leinster Park; a vast residence which was demolished in the 1980s and replaced with modern townhouses.

This was the Dublin bolthole of Edward Pakenham, 6th Earl of Longford, who financed the Gate Theatre when it ran into financial difficulties in the 1930s. He along with his wife Christine continued to finance the Gate until 1936, when they established their theatre company Longford Players.  In addition, Number 49b was home to Constance and Casimir Markievicz, who had links with both The Abbey Theatre and The Theatre of Ireland.

Number 60, dating from 1860, was purchased by its current owners 30 years ago when it had been occupied by a widower who ran the house as a nursing home to make ends meet.

“I couldn’t wait to get my hands on it, as it was in bits but had so much potential,” says the owner who is now downsizing. “I remember strapping the doors onto the roof of my car, with two babies in the back seat, and taking them to Dún Laoghaire to have them dipped in order to restore them.”

The entire house was painstakingly restored over the course of three decades, using many of Ireland’s expert restoration companies.

The interiors are a melange of antique and French country chic – the owner has a passion for antiques and worked in France as a translator in the past. The dining room table is not what one would expect here, instead of a large antique table, it is bespoke, uneven and made from scaffolding planks on old frames. It is a bold move but it works and like the rest of the property, with colours and décor, is quite dramatic.

The finest room of the 279sm (3,003sq ft) property is the main bedroom which spans the entire width of the house and looks out onto what was the Earl of Longford’s land. Housing a four poster bed, two large windows, the laden basket of logs beside the original fireplace is testament to its use.

The property was subdivided when the couple’s children started college.

“We moved downstairs and put a simple kitchen in on the return at hall level so the kids had the whole of the upstairs to themselves.”

This goes to explain why there are two kitchens in the property – the main one lies at garden level. The property has five bedrooms in total and a multitude of bathrooms. The rear garden is substantial and planning was granted in 2006 for a two-storey mews. Although now lapsed, there is a precedence for same along the road.

The house was originally for sale in 2017 through Savills asking €1.95m. Sherry FitzGerald are now seeking €1.75m for this eclectic house laden with character.

The nuns of Leap: ‘We refuse to go along with modernism’
9

How can we best manage our children’s screen time?
Real news has value SUBSCRIBE