Tahilla has welcomed many politicians over the years, including Jack Lynch, Erskine Childers and Liam Cosgrave 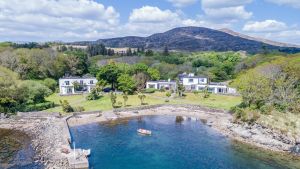 An 11 acre plot of land near Sneem in Co Kerry was purchased in the 1930’s by Horace Roye, the English photographer whose nude portraits scandalised London at the time. Though Roye never developed the lands, the setting for his Irish Maid series bears a remarkable resemblance to the shoreline of Tahilla Cove.

The lands were then sold by Roye to Charles Waterhouse; father of the current owner James Waterhouse, who built two significant properties here in the 1940’s – one as a family home and the second as a guesthouse.

Over the years Tahilla has welcomed many politicians, including Jack Lynch, Erskine Childers, Liam Cosgrave and Dorothy and Harold Macmillan. Roye last visited Tahilla Cove in 1998 prior to his murder in Morocco in 2002.

What is mainly for sale here, besides two properties in need of upgrading, is an idyllic waterside location on 11 acres. The 600m of water frontage has a private pier, with surrounding waters deep enough to moor a yacht, and shallows perfect for morning swims.

Meandering pathways ramble through an old oak forest, with views to the Caha Mountains on the Beara peninsula, and Rossmore Island, which acts as a shelter against prevailing winds.

The properties – a 470sq m (5,064sq ft) guest house, and 244sq m (2,630sq ft) family home – have huge potential to be developed into a very fine country retreat if a buyer can see beyond the somewhat dated interiors and a multitude of bedrooms.

The location just a short drive from Parknasilla, was described by George Bernard Shaw as a place which “does not belong to any world that you or I have ever worked or lived in – it is a part of our dream world”.

Recent sales for waterfront properties in the area reflect this sentiment. Shearwater, a new 510sq m property on 6 acres sold in 2016 for €2.7million and Drimna Lodge, a three bed 244sq m house on seven acres sold for €1.2million.