Would you buy a house someone had been murdered in? 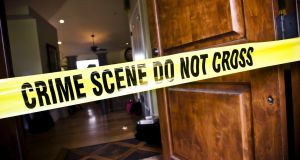 Dead end? Every old house has its secrets, and there is often a likelihood someone may have died there.

Every old house has its secrets. As a new owner, you will probably never find out what went on within those four walls, and in many cases, there’s probably much you wouldn’t want to know. But what if you found out something about its past so dark, you couldn’t forget? Is there anything you wouldn’t be willing to accept for a nice house at the right price?

Last summer, a gorgeous house came up for sale which we spent weeks deliberating over. Sitting on the end of a redbrick terrace, it seemed to have everything we wanted and more. The main bedroom spanned the width of the house with two big sash windows flooding it with light. It was nicely renovated with the original period features retained, and out the back was a large west-facing garden lined by tall trees.

Leaving the first viewing, I spotted one of my aunt’s watercolours hanging on the dining room wall, which she remembers selling a few years back. I don’t usually have a jot of superstition in me but in every house we’ve liked, I’ve looked for signs. This was it.

But we couldn’t shake a bad feeling we had about the surrounding streets. The area itself was very close to where we would ideally like to buy, but this house was at the end of a network of roads with a number of boarded up buildings. Even in the middle of a sunny summer’s day, I felt uneasy walking around. A friend renting nearby said they would not buy around there themselves.

So when bidding climbed above what we were willing to pay, we were relieved for once. The decision was made for us.

We’ve often since asked each other whether we regretted not going for that house, it being so much nicer than any other that has come up in our price bracket since.

When the ad popped up on MyHome.ie again in February, my partner sent me a message. “Are you thinking what I’m thinking?” We made plans to view it that weekend. But over lunch that day, he did some Googling. Using Image Search, he found a photo of the house with black bags over the door and windows. He thought it was a pre-renovation image, and clicked in, only to find a decade-old RTÉ news report about a man stabbed to death by a burglar on the stairs.

We had read about the case before, and knew there had been a murder somewhere on that street more than a decade ago. But it is a long road, and the house number was never mentioned in the news reports. Ten years is a long time ago. But finding out that it happened in this very house, by a man who turned out to be living around the corner, our reaction was completely different.

I have told this story to many people since and the responses are polarised. Some are horrified by the idea, relieved on our behalf that we found out. But just as many others shrug and say, “For the right price? Well…” Especially when they see a photo of it.

They are right to a certain extent. Every old house has its secrets, and there is often a likelihood someone may have died there. The notion of an old person spending their last hours in one of the rooms doesn’t bother me remotely; in fact, I quite like the idea of taking on a home where someone has lived a long (and hopefully happy) life, even right to the end.

But I don’t think I would be able to shake the image of that poor man’s violent death every time I walked upstairs.

Sinead O’Connor spent almost €2 million in 2007 on a house on Bray seafront where the body of 18-year-old Gillian Bishop was discovered in a laneway out the back, 16 years previously. The story was well-known in the area, but O’Connor was reportedly unaware when she bought.

The same could easily have happened to us, and the idea gives me the shivers. The estate agent certainly wouldn’t have volunteered the information, and as we’re not from around there, who would have told us before we moved in? It has been a good lesson in the importance of thorough research, and asking a lot of questions.

As far as we can tell, the sale has fallen through at least twice on this house. We wonder, was that because the bidders found out about its history, just in time?

The ad is gone again, so I presume a sale is agreed. I hope for their sake the new owners are fully aware. If they are, and can accept what went before, fair play – they will have a gorgeous home.

What sold for about €500k in Ballsbridge, Dalkey, Sallynoggin and Lismore

A €29k cottage? A €90k church? One woman’s search for Ireland’s cheapest houses
9

Ross O’Carroll-Kelly: ‘Sold to the man in the Ireland jersey with a bowtie tied around his neck!’
Real news has value SUBSCRIBE