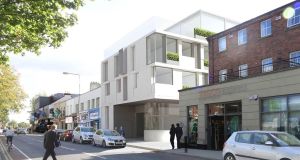 Two companies associated with businessman Paddy McKillen Jnr, Original Point and Oakmount, have been given the green light this month for a boutique hotel development in the heart of Ranelagh, Dublin 6.

Number 117-119 Ranelagh includes the former Laser video library site on the Main Street opposite the Bank of Ireland and a few doors down from Birchalls Pub. It was offered for sale in 2013 and later sold through Knight Frank to McKillen.

The top floor will again be home to a rooftop restaurant with outdoor terrace, while the first and second floors comprise 41 hotel rooms. The hotel’s basement will contain a 50-seater cinema and conference facilities.

The properties were previously owned by property developer Leo Mohan, who had obtained planning permission for a large mixed-use scheme of retail space and apartments.

McKillen’s companies applied for permission in November 2015 to demolish the existing buildings to make way for the new hotel, which will also include two restaurants.

Nearly 30 individuals, including Labour TD Ruairí Quinn and a handful of councillors, contested the plans citing the lack of parking facilities and potential noise pollution amongst their concerns. However Dublin City Council granted planning permission.

Having established some of the busiest bars and restaurants in Dublin in recent years, the low-profile McKillen Jr with business partner Matt Ryan has also led a number of high-end developments, including One Percy Lane in Ballsbridge and nearby 55 Percy Place, where 12 luxury apartments will be offered for sale this month.

McKillen investment vehicle Oakmount entered the office space market in December when it purchased a 0.5 acre site along the Grand Canal at Charlemont Place for an estimated €16 million one month after it had been placed for sale though Knight Frank by Durkan Group. It has full planning permission for 6,600sq m (7,1041 sq ft) of glazed office space.

This year is is set to be another busy one for the developer with another new hotel is apparently in the pipeline – this time on North Wall Quay in the docklands, where his company paid a reported €5 million for a warehouse in recent months. It is is expected to be redeveloped as a hotel.