NZ smuggler had 1,000 cacti and succulents strapped to her body

Auckland woman sentenced after being caught in 2019 with plants worth €10,000 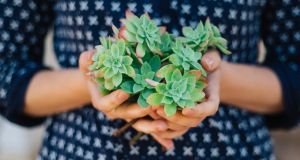 Younger buyers influenced by Instagram and social media platforms are seeking out the latest-trending plants to add to their collections. Photograph: iStock

A woman has been sentenced in New Zealand after being caught trying to smuggle nearly 1,000 cacti and succulents strapped to her body.

Wenqing Li, known as Wendy, pleaded guilty at the Manukau district court to charges under two separate violations of biosecurity laws, attempting to bring in plants from China.

In March 2019, the 38-year-old, who lives in Auckland, attempted to smuggle 947 succulents and cacti by putting them inside stockings and strapping them on her body. The plants were worth over $10,000 and included eight endangered and threatened species.

When Li was noticed by a detector dog on arrival at Auckland international airport, she tried to dispose of the haul in the toilets, where, the Ministry for Primary Industries said in a statement, “a large amount of plant material was found”.

Li intended to sell the succulents and cacti – which were said to have “high commercial value” – on the online marketplace TradeMe. The global lockdowns caused by coronavirus have driven a surge in demand for houseplants as people seek to improve their home environments and younger buyers influenced by Instagram and social media platforms seek out the latest-trending plants to add to their collections.

In a separate incident in July 2019, Li was found to have 142 unauthorised seeds hidden inside commercially packaged iPad covers in her luggage, as well as more than 200 plant pots, one of which contained a snail.

This week Li was sentenced to 12 months of intensive supervision and 100 hours of community work.

Simon Anderson, an investigations manager at the Ministry for Primary Industries, said the sentencing was “a good reminder that anyone who smuggles plants or other endangered species into New Zealand can expect to be prosecuted”.

“Our economy and way of life is dependent on keeping these threats out of the country.”

Q&A: Will I be able to go on holiday this year?