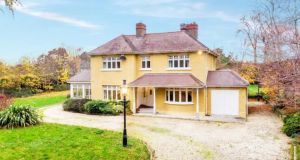 One interesting sale this week will be closely watched by Foxrock locals to see what happens next. Rockbrae, a 180sq m (1,935sq ft) home on Westminster Road, Dublin 18, came to the market in early December – not always an optimal time to put a house up for sale – and sold this week for about €1.8 million.

The swift private-treaty sale, through the online auction platform BidX1, was conducted in the middle of the latest Covid-19 lockdown, but it seems plenty of interested buyers still lined up. Not surprising, really, given the clear attraction of Rockbrae: it occupies a substantial, 0.77ac (0.31ha) site in the heart of Foxrock village and falls under the Dún Laoghaire-Rathdown development plan for 2016-22.

Just next door, Greencroft Construction is building eight new townhouses on a site that sold in 2016 for €2 million. At 0.6ac (0.24ha), it is smaller than Rockbrae’s. And it is just one of a number of former residential sites in the area being redeveloped for new homes.

BidX1 says more than 20 interested buyers downloaded the legal documents for Rockbrae, which was an institutional sale. The final buyer did not visit the property, instead viewing it only virtually. The transaction was completed via BidX1’s online “deal room”, with unconditional digital contracts exchanged on Tuesday.

The buyer is understood to have purchased Rockbrae to add to an existing property portfolio, but it’s not apparent if there are immediate plans to proceed with its development. The fate of the prominent site is likely to be closely observed.