Nostalgia is getting in the way of our cottage conversion 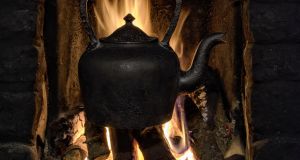 When I lived in the city, a pub I liked changed hands. The old interior fittings were ripped out, along with assorted bric-a-brac accumulated over decades, and the whole place was redesigned as a “traditional Irish pub”. Shelves were built and painted to look like the earlier ones then strewn with bogus “curiosities” for an “authentic” look. The walls were redecorated in colours chosen to evoke years of tobacco staining: all hugely expensive and all utterly fake. I snorted contemptuously and went elsewhere.

Years later, however, when we bought our country cottage I was delighted to discover an old, black kettle and matching stirabout pot hanging from a chain and gathering dust in a corner of the open fireplace. I imagined a century of turf fires flickering to keep this very kettle on the boil and countless dinners cooked in this actual pot. My wife instantly saw them for the replicas they were and banished them. I hid them in the garage because I couldn’t throw them out even though they will never be actually used. Nor will I ever display them as my wife’s derision would far surmount mine for the phoney pub.

She’s right of course. She often is. She recognised my sentimental hankering after a past I never had for what it was – spurious nostalgia. Mostly she lets me discover this for myself. I found an abandoned scythe and it amused her to watch me swing it ineffectually at weeds until I gave up, exhausted, and borrowed a strimmer. When I sweated at the wood pile with a bow saw, she brought tea and nodded encouragingly till I got sense and bought a chainsaw. But she has fond, impractical attachments of her own. Hidden behind the brick surround of the fireplace, just above the hearth, is an iron bar from which hams would once have hung to be slowly smoked. It will never again be used but she likes to know it’s there. And dotted around the perimeter of our acre, but long since overgrown and obscured by the hawthorn hedge, are a dozen rough hewn, derelict granite fence posts. They have no purpose, utilitarian or aesthetic, other than pleasing her mind.

The house has other vintage idiosyncrasies which have been endearing (and annoying) to live with, but hard decisions will need to be made if we ever extend. Our two small boys are rapidly outgrowing the place and we need to face this reality but the question is – what would we wish to conserve and what do we need to ditch? The black kettle and the stirabout pot are unobtrusive and I think my wife is unaware they still lurk harmlessly on a shelf behind tins of paint and bottles of two-stroke oil, but what about the kitchen fireplace? It is spacious but redundant. Should we remove it, smoking bar and all? It’s clearly the sensible thing to do.

And what about the other unused fireplaces? And all the cute doors? These are solid wood, tongued and grooved, fitted with latches and probably original. We have three more, acquired from I forget where, stashed in the garage. They are fine and substantial things but they are also small. I am of average height and wander in and out unthinkingly but anyone of moderate height has to stoop. Do we keep the agreeably traditional doors at the price of watching any visiting tall friends repeatedly whack their heads on the lintels? Our older boy will loom over me in a year or so. I like to think he is bright but he is 13 and beginning to display the interior absorption and apparent dull-wittedness of adolescence. Is there a risk of future brain damage resulting from him persistently thumping his forehead as he grunts and lurches about the house, headphones on and oblivious to warning shouts?

The conflict between “character” and comfort extends beyond considering the interior of the house. Next to the cottage is an old stone building the size of a garden shed. It used to house the piggery and an outside toilet – neither of which features do we wish to revive. But we must, regretfully do something about our old iron, five-barred gate. It swings snugly between two more hefty slabs of the lovely, granite. The problem is it was hung to facilitate nothing wider than a horse and cart – no one foresaw Henry Ford making thousands of Thin Lizzies and inaugurating the age of the car. We have almost lost friends as a result of scratched paintwork on a variety of proud vehicles over our years here. We simply must widen the entrance. Sadly the venerable gate would thereby become obsolete and nobody local seems prepared to move the post for fear of cracking the well-weathered stone.

Our boys may have left for the city by the time we act. But with the increasing population and a growing housing shortage maybe they will recall their childhood in a small country cottage and remember themselves as “lords of infinite space”.

Philip Judge is author of In Sight of Yellow Mountain (Gill Books) and is currently rehearsing Two Pints by Roddy Doyle for the Abbey Theatre.

‘My life has been destroyed by many catastrophes, most of which never happened’
7

Fish for Good Friday? How to make it taste fabulous
10