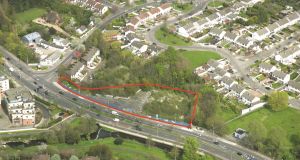 LDC Developments was refused permission for 69 apartments on the 1.1 acre former Royal Oak pub site on the N2. The company is awaiting an appeal decision from An Bord Pleanála

LDC Developments, a company associated with Margaret Scully, wife of Karl Scully who developed properties predominantly in north Dublin during the Celtic Tiger era, has launched a development of five new A-rated apartments on Warrenhouse Road in Baldoyle, Dublin 13. The two-bedroom units are priced for sale from €385,000 to €500,000 and are built on the grounds of the Warrencourt Apartments development.

These apartments are just one of a number of small projects in north Dublin that the company is developing. It has bigger ambitions for high-density residential developments in Finglas and Drumcondra, which have been refused by Dublin City Council.

LDC purchased the 1.1 acre former Royal Oak pub site on the N2 road when it emerged on the market in 2015 seeking just €750,000. It sought planning permission in March 2017 for 69 apartments in two blocks on the site, complete with a basement with 104 car-parking spaces. Following the council’s refusal, the company is awaiting a decision from An Bord Pleanála on their appeal.

In Drumcondra, the company acquired a site beside the established Hampton Lodge apartment scheme. It developed four houses on the land, all of which have sold for up to €485,000 each. However the company’s hopes of building a block of nine apartments on the remainder of the site were shot down by the council and An Bord Pleanála.

Karl Scully made headlines for other reasons during the recession when his speculatively built house on Claremont Road in Sutton, sold for €1.1 million – down from its original €7 million asking price.

Chinese new year: celebrate the Year of the Rat with dumplings
7