Investing in Irish art for a rainy day? It’s not without risk

Irish art took a hit in the recession, but de Veres’ auction may spark fresh interest 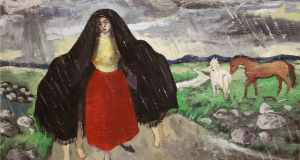 Unlike Dublin property, Irish art bought during the peak of the economic boom has not yet – and may not for a long time – see prices return to 2006/2007 levels. That’s not a problem for people who bought for pleasure – or for the very long term – but, for investors speculating in the Irish market, the steep drop in prices over the past decade has been a bruising, sobering and salutary experience.

In 2011, it turned up at a Bonhams auction in London with an estimate of £40,000-£60,000, but failed to sell. The market for Irish art in London had ground to a halt and, that year, even Sotheby’s announced the suspension of its annual Irish Art sale. Later, Bonhams told The Irish Times that it had sold the painting for £39,600 in a post-sale, private transaction.

Now, over a decade after selling at Adam’s, A Wet Day, Ireland is back on the market in Dublin and will go under the hammer as Lot 49 in de Veres Irish Art auction on Wednesday evening (September 20th) with an estimate of just €20,000-€30,000.

The painting depicts a Connemara mother protecting her barefoot children from the rain with her homespun shawl as they walk on a bog road close to ponies.

Dillon, who was born in Belfast in 1916, was a self-taught artist who began his working life as a painter and decorator before going on to become one of Northern Ireland’s best-known artists of the 20th century. His paintings regularly appear at auction and also hang in various public collections.

He painted A Wet Day, Ireland in 1950 when he was living on Inishlacken Island off Roundstone in Co Galway. In a letter to a friend he commented acidly on the weather in Connemara: “It pissed the whole time.”

A very different and more traditional painting is Lot 48, A Muted Appeal – The Little Match Girl, by Richard Thomas Moynan (€6,000-€9,000). The oil-on-canvas, dated 1895, depicts a girl sitting in a Georgian doorway in Dublin (possibly Neary’s Pub) selling matches. She’s wearing a long brown dress and jacket with a green shawl draped around her shoulders.

According to the catalogue note, the model for this painting was a street vendor who worked principally in Chatham Street, off Grafton Street, and featured in other paintings by the artist. This picture was painted in the artist’s studio in Harold’s Cross in 1895, and exhibited in the RHA in March of the same year with a price tag of £50.

Moynan’s best-known painting, Military Maneuvers, which depicts ragged children in Leixlip pretending to be a military band, hangs in the National Gallery of Ireland and is so popular it appears on a fridge magnet in the gallery’s gift shop.

Victorian art continues to be significantly undervalued, and another attractive example in this auction is Lot 44, Gathering Beans by Arthur David McCormick (€4,000-€6,000). The oil-on-canvas is dated 1899. The artist, who was born in Coleraine, Co Derry in 1860 and died in 1943, is most famous for his 1927 painting Head of a Sailor that was commissioned by the tobacco company John Player & Son and used as the logo for a hugely popular cigarette brand, Player’s Navy Cut.

In all, de Veres has 132 lots – paintings and sculpture – and viewing is under way at 35 Kildare street. The auction itself takes place in the Royal College of Physicians at 6 Kildare Street on Wednesday, September 20th at 6pm. Live online bidding is available, subject to registration, via the-saleroom.com

De Veres is currently seeking consignments for its winter Irish Art auction – in Dublin in November. The deadline is October 27th.