Thank Guinness for this Crumlin three bed for €475,000 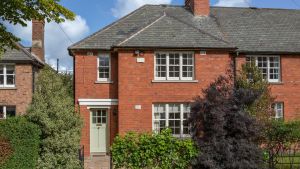 Built in the early 1920s by a trust established by Edward Guinness (the first Earl of Iveagh), Iveagh Gardens is a charming and quiet set of redbrick terraced houses, set handily off Crumlin Road in Dublin 12. Number 88, which is for sale with DNG for €475,000, has multiple fringe benefits. As it’s at the end of the terrace, it gets extra light. This part of the mini-estate also has large back gardens, and views onto the Iveagh sports grounds. It’s super quiet too, so at 107sq m (1,152sq ft) and with three bedrooms, it’s a great proposition for a first home.

The first tenants of the Gardens had a few rules to abide by: they had to put up two punts and 10 shillings against any potential damages, and sign up to the Rules, which included a clause against “intemperate conduct on the premises”.

Now that the houses have passed into private ownership, those rules are long gone, so intemperate behaviour may be an option, though the owner says it’s such a lovely community to bring kids up in that a new owner might want to temper any impulses.

The house has been extended to provide a lovely bright breakfast/dining area off the kitchen, with a sweet Rayburn range. In fact, the decor and upkeep are pristine throughout, so all a buyer need do is move in. The kitchen opens up to a cosy sitting room which has a fireplace complete with gas fire. Go upstairs for three bedrooms and a bright, stylish bathroom. Plenty of original features, including the solid wood flooring, have been preserved, while updates include dry lining and double glazing to deliver a respectable BER of C1.

“We’re a long way from self-sufficient,” says the owner, though he points out pear and apple trees, a herb garden and vegetable beds outside. All this and there is still a patio and plenty of lawn to kick a ball about. The garden shed has been repurposed as a utility room, so the kitchen is unencumbered by mundane domestic drudge.

Meanwhile, there’s a row of local shops practically on the doorstep, and 10 minutes away is the Luas. The space outside suggests potential to extend even further (with the appropriate permission) and extend the house’s potential as a family home for life.