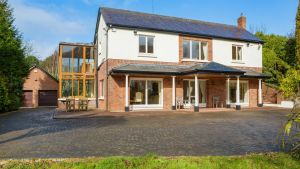 A very large house on 2.2 landscaped acres down a narrow country lane enjoys rural peace and quiet – yet is still a short drive from Stepaside, Shankill and the M50.

Shanrose, a 487sq m (5,250sq ft) five-bed with a two-storey glazed extension looking over surrounding countryside, is a 1970s house that was extended and revamped in 2000 before the current owners moved in in 2003.

In the early noughties the house featured in interiors magazines, focusing on features like its two-storey conservatory with views of the Dublin mountains, wine cellar, black-and-white Siematic kitchen and three-tier deck in the back garden. But it failed to sell when it went on the market soon after the peak of the property boom, dropping its asking price from €4.5 million to €4.1 million in May 2007.

Thirteen years on, Shanrose is for sale again, this time for €1.695 million through Sherry FitzGerald. It has been rented since 2008, but looks in pretty good condition, although it is currently empty of most of its furniture.  Shanrose has stone or timber floors, part or fully-tiled en suites and a dramatic mezzanine level with countryside views.

It’s designed so that many of the rooms upstairs and down open directly into the garden. The most striking accommodation is upstairs, where the bedrooms open off two sides of upstairs reception rooms. There is a lot of wood: stripped timber doors, pine-railed banisters and vaulted timber ceilings give a very rustic feel.

A cobblelocked driveway leads to the porticoed – but fairly pedestrian – front entrance into Shanrose that doesn’t hint at the more dramatic interior. A bright double-height entrance hall is floored with goldenish stone tiles. On its right is an oak-floored reception room with a large brick fireplace and patio doors opening into the garden.

On the left is the oak-floored and still-furnished dining room opening into the stone-floored kitchen: this has white units, polished black granite countertops, island unit and black Aga.

A large study at the back of the house is lined with built-in desks; next to it is a larger utility room opening into a storage room and then into a good-sized wine cellar.

Upstairs, a glazed door from the top landing opens into two rooms that run from the back to nearly the front of the house: a timber-floored room with a vaulted timber ceiling, with a piano in one corner and a door onto a deck at the back outside, is called the music room.

The main bedroom opens directly off the mezzanine room: it has built-in wardrobes, like all the bedrooms, and a large fully-tiled en suite. Three of the five bedrooms are en suite; one of them opens onto an outside deck.

Shanrose stands in the middle of large landscaped gardens, surrounded by trees and bushes. A large sloping lawn at the back has children’s play equipment in it and a paved walk running beside; a three-tiered deck at the back of the house has plenty of seating areas.

The front lawn, filled with various plants and shrubs, slopes down to electronic gates. There is also a large separate double garage at the back. The property has a respectable C1 energy rating.

Bishops Lane is a narrow road off the R116 that runs from the Enniskerry Road up to Glencullen. It winds past the 12th century Bishops Lane burial ground and a handful of houses mostly hidden by tall trees.