Foxrock House on 1.34-acre grounds could be an attractive development prospect given its prime location 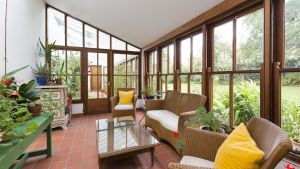 Foxrock House, a very large property on 1.34 acres built in 2003 in the grounds of a Victorian house just off the N11 in Foxrock is a contemporary house with some period features that could be bought as a single family home. But the property also has development potential, given its size, and might accommodate a scheme of houses and/or apartments, subject to planning permission.

Mary Considine and her husband Paddy reared eight children in Cornelscourt House, the period house next door, where they lived since 1961; after her husband’s death, Mary built Foxrock House, designed by her architect daughter Jane, on half of Cornelscourt’s very large garden. Hidden away at the end of a long driveway, Foxrock House is one of several on a sliver of the Old Bray Road at its junction with the N11, just past the large AIB bank building and the Magic Carpet pub.

Foxrock House extends to 400sq m (4,305sq ft) and is for sale through Vincent Finnegan for €3.5 million. It has four bedrooms, a large tennis court, huge lawn and a long conservatory/greenhouse.

Cornelscourt House next door, a protected structure, is now the home of a member of the Durkan building family; in 2006, a company with Durkan family members as its directors planned to build four large houses on the site next to the house, but lost on appeal to An Bord Pleanála.  Permission has recently been sought for the building of a five-bedroom detached house on the site.

Over a decade on, with demand for houses far outstripping supply, it’s possible that planners would give someone buying Foxrock House permission for building on land not immediately adjacent to the protected structure.

Agent Stuart Walker suggests access could be from Mart Lane, onto which Foxrock House’s garden backs, and could involve buying one of the houses there to create access. It is possible the house could be reconfigured as several large apartments of around 100sq m (1,076sq ft) each.

The house, a bright building with a flexible layout, has been a centre for Mary Considine’s large family – she has 19 grandchildren – and the location for weddings and parties. Artistic flair runs in the family: the late Paddy Considine was an illustrator who founded advertising agency Adsell. Three of his daughters, Anne, Catherine and Mary Frances, are artists, whose works line the wall of the new house; another daughter is Sheila Considine, a medical doctor turned dress designer.

Foxrock House has an exterior of pale Belgian brick, with lots of Iroko wood-framed double-glazed windows. Inside, a large, square split-level hall is floored in limestone tiles and, up a few steps, with Sapele, a dark mahogany wood used throughout the house in floors and doors.

Jane incorporated touches to reflect the style of the Victorian house the family had lived in: there is detailed cornicing and a few new centre roses in several rooms, and even a bell in a modern marble fireplace in the livingroom which connects to a panel in the kitchen. She also designed the house with public and private spaces, making it suitable for owners who like to entertain.

Directly ahead of the entrance hall are the livingroom and two more interconnecting reception rooms. Sliding glazed doors open onto a terrace beside the lawn. On the left of the front hall, doors open into a wide family room-cum-dining space and then into a large, bright kitchen with an Aga, floored with black limestone. Off it is a back kitchen with ovens and a hob and pull-out storage units, a small laundry room and a shower-room.

In the hall, sliding wooden doors open onto a Juliette balcony overlooking the long, sloping back lawn.Steep ladder-style stairs concealed in a cupboard on the main landing lead up to a 11sq m (118sq ft) floored attic.

Doors from the kitchen open into a long, narrow conservatory with a brick floor, and through more doors into the greenhouse, where vines and tomatoes grow. There’s an Omnicourt artificial grass tennis court on one side of the house and the long lawn. A detached garage beside the driveway – beneath tall Sequoia trees in the grounds of Cornelscourt House – offers potential for conversion.