On the Waterfront: Drumcondra penthouse for €500,000

By the Tolka river, there’s been a price boost in the block since the receiver sale in 2010 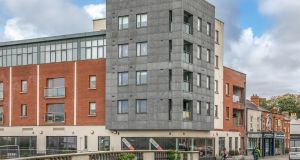 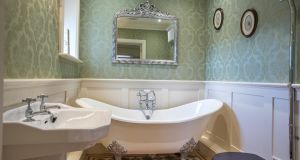 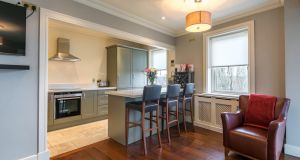 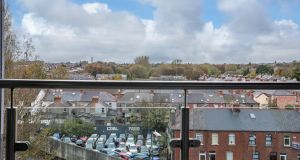 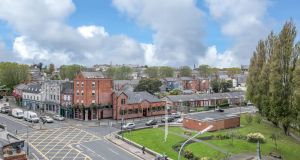 The Waterfront is a landmark modern apartment building on the banks of the Tolka river in Drumcondra. It was built by developers Walsh Maguire in 2008 but the timing was off and the properties missed the boom. The one- and two-bed apartment block, fronting on to Drumcondra Road, has a dark grey concrete and red brick façade and backs on to the river. It boasts large communal terraces, a boardwalk along the river and retail spaces at ground floor. Two-bedroom apartments were originally asking from €535,000.

Units brought to market by receivers Grant Thornton in 2010 were priced at 55 per cent below the original asking prices.

When the owner of number 19 bought this two-bed penthouse in 2013 he paid €281,000 for the 90sq m (968sq ft), C1 BER-rated unit, according to the Property Price Register. He added reclaimed floorboards, a painted kitchen, and encaustic tiled floors in the bathrooms and entrance hall imported from Belgium.

He also opened up the separate kitchen and installed sleek integrated appliances to create an open plan space. From a small balcony that overlooks the river you can see the round tower built to commemorate Daniel O’Connell in Glasnevin Cemetery.

The apartment returns to the market with an asking price of €500,000 through agent DNG – a 43 per cent increase in just over four years.

The apartment has direct access from the lobby via a lift that opens into a highly decorative hall and a large, circa 21sq m, south-facing terrace whose views take in some of the capital’s best-known landmarks.

This is one of the development’s best features. The communal space sits above a busy thoroughfare but the deciduous trees below create a russet and gold canopy. To the east are the Poolbeg towers and there are views west across the Tolka to Griffith Park which is a short walk away.

The main bedroom has a shower en suite, also floored in printed tiles from Belgium. There is good built-in storage and the property comes to market with two car parking spaces in a secure garage.

Apartment 17 in The Waterfront, another top-floor apartment in the development is also for sale. This two-bed property has a smaller balcony and is smaller in size. Measuring 77sq m (829sq ft) it is seeking €425,000 through O’Connor Estate Agents. Its asking price is up 36 per cent in the six years since it was purchased in 2011 for €270,000 according to the Property Price Register.