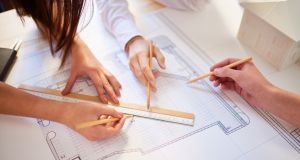 The urban world we are building sometimes seems to be one of mass housing blocks with little sense of aesthetics or proportion.

I was watching the other evening one of those worthy, but rather depressing documentaries about how industrial, worldwide production of meat was causing major environmental problems. There were images of scores of densely concentrated factory farms in America pouring vast amounts of sewage into rivers and releasing methane into the atmosphere, and the all-too-familiar footage of swathes of the precious Amazon rainforest being cut down to make way for cattle grazing.

We are as a species sometimes incapable it seems of resisting the capitalist juggernaut that demands the endless pursuit of maximum profit and mass production, bulldozing any environmental or community concern that stands in its way. Watching these images, I began to link them in my mind with occasionally depressing trends in the property sector, where mass developments attempt to extract maximum profit by building the greatest number of units with blithe disregard to the surrounding environment.

One Oxford academic, for example, recently referred to the “cellular” units into which tens of thousands of students were being packed in mass student housing blocks, comparing them to prisons and pointing out their mental health might be suffering as a result. But it’s not just the students who are sometimes uncomfortably packed in.

As someone with a passionate interest in heritage buildings, I was recently assessing a handsome mid-Victorian villa with a well-proportioned ancillary building on a 0.8 acre suburban plot. I calculated that the house, which had previously been used as offices and had fallen into some decay, together with the adjoining building could be handsomely restored and the site turned into perhaps 20 two-bedroom flats, keeping the original footprint of the buildings and restoring the once-pretty gardens around them. Such a development would be a proud addition to the neighbourhood.

Yet I discovered that the actual proposal for the site was to demolish the ancillary building and for the original villa to be overwhelmed with a densely massed building containing 115 flats. There would be no garden – the building would go up close to the perimeter – and parking for only four cars. With this type of mass development, the annual rent from the site would increase from perhaps €200,000 a year (for a conservative development preserving the existing buildings) to over €1 million a year. If you are a developer in search of profit, it’s a “no-brainer”.

The result would be another block of over-massed housing, but how can you resist the remorseless drive of such economics? I find that just about every site I look at these days there is some application in play to vastly increase housing density. A row of four large Victorian terraces on a site near my office is at risk of being demolished to make way for an “apartment hotel” with 150 apartments. The developer’s plan is to build up to the perimeter in every direction, even hoping to block out the sunlight from one of the adjoining properties. A bland five-storey square building with a mass of tiny windows would rise up over the elegant Victorian terrace next to it.

An architect friend – a talented, kindly man – recently proudly showed me some of his recent projects, one of which consisted of packing six houses into the medium-sized garden of a Victorian house. “It was a tight site, but we managed it,” he said cheerfully.

Like watching in mild horror the ever-growing encroachment on the rain forests and natural environment by industrialised, agricultural techniques, I find myself often witnessing the remorseless desecration of urban and suburban environments around me. The urban world we are building sometimes seems to be one of mass housing blocks with little sense of aesthetics or proportion, the only concern being where the greatest profit lies.

I can’t in truth propose an easy solution to this remorseless trend towards overdevelopment. Cities and national governments periodically release “guidelines” on the type of development density they are looking for and then conveniently ignore them via loopholes when faced with developer pressure. The point I would like to make, however, is that the problems faced in our property sectors and more general worldwide environmental problems are not unconnected.

I’m a fan of free markets and enterprise, but working out how we can persuade the profit-seeking juggernaut to rein itself back to act with a greater environmental consciousness is a considerable problem. We want developers to build in a way that will create cities we actually enjoy living in and looking at – of which future generations can be proud – not just delivering short-term profits for distant investors.

Damian Flanagan is a property investor, writer and critic