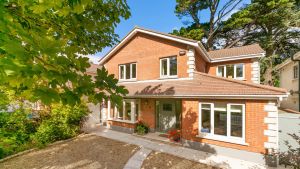 A large, bright, open-plan kitchen/family room/diningroom is the most striking feature of a detached 1990s suburban five-bed in south Dublin. Pictures and agent Lisney’s video show an L-shaped space painted white, floored with large white tiles, with mostly floor-to-ceiling windows and doors opening into the back garden.

It last sold around the peak of the property boom in summer 2007 for a reported €1.265 million. Since then the house has been renovated and extended, with builders Buildpol knocking down a wall between the original kitchen and diningroom to create the smart new kitchen. In 2019, all the windows were replaced by Munster Joinery.

There’s a livingroom on the left of the oak-floored front hall and a TV room/playroom on the right. The livingroom has the same oak flooring as the hall, a bay window, fireplace with a limestone mantelpiece and frosted glass door opening into the kitchen/diningroom/family room.

The kitchen has white units, island unit, pull-out larder and Neff appliances. There are cupboards, shelves and a raised enclosed electric fireplace in the family room and a utility room off the kitchen. Downstairs accommodation also includes a fully-tiled bathroom and a TV/playroom fitted with cupboards.

Upstairs are five bedrooms, four doubles and a single, and the fully-tiled family bathroom. The bedrooms have fitted wardrobes and the main bedroom has a tiled en suite shower room. The single room at the front of the house is used as a study, fitted with shelves and cupboards.

Outside in the back garden there’s a timber-floored and insulated garden room currently used as a gym. The landscaped garden has two raised terraces with a lawn between them and there are mature trees behind the garden walls of Number 6. The gravelled front garden, with raised flowerbeds at its side, has room to park several cars and a car charging point. It is a short walk from Maple Manor across the N11 to Cabinteely village.