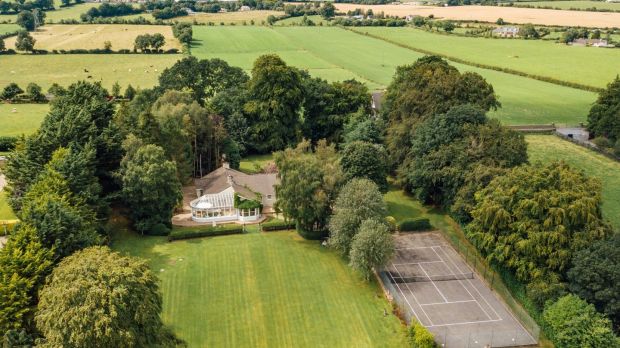 “We moved here over 30 years ago,” the owner of Roslevin says. He knows the year exactly, because the couple’s twins were born soon after. “They had a birthday yesterday,” he says, not without a sense of pride. “It has been a great family home,” he continues. “It’s ideal for younger children, there’s a paddock for a pony. For teenaged children, we have a tennis court, and plenty more space.”

Some of that space was created by the owners themselves, who extended the kitchen, built on a large conservatory and added a main bedroom suite, that includes a dressing room and en suite, to bring the overall area to 372sq m (4,000sq ft).

“The house would be very different to the way it was when we got it originally,” he says. “We have five bedrooms, and I use the sixth as a study.” A cosy room, with dark red walls, it has seen plenty of use over the years by the recently retired judge.

“The conservatory is the biggest draw for us,” says the owner. “It’s bigger than we had intended it to be, but from March to the end of October it’s a lovely place to sit in, and to eat in.” In the winter months, they gravitate to the family room, which is warmed by a stove. “The drawing room is great if you’re having a big party,” he says. And I can imagine the elegant dual-aspect room, with its open Adams-style fireplace, tall windows, and space for huge sofas, truly coming into its own when thronged with guests.

All laid out on a single floor, Roslevin is designed so that the living areas are to the right of the entrance hall. The five bedrooms – six, if you want to repurpose the study – are to the left. At the far end, the main bedroom suite is exceptionally large, and has its own laundry room/kitchen, with a separate entrance, providing the option for a self-contained apartment within the house.

Another attraction of Roslevin is the area. “We’re very close to Punchestown, which is open year round for walking,” says the owner, also noting that this entire part of Co Kildare is top-quality horse country. “We’re on a quiet road, but close to the main road too.”

The house is less than 10 minutes from Naas, and under 15 to Kilcullen while the Brown Bear Restaurant is recommended at Two Mile House, less than five minutes away.

Now planning to move to Dublin, to be close to children and grandchildren, they will miss the garden.

“We have a very big garden [2 acres], and we’re keen gardeners. It does take work, and though I say it myself, it is meticulously cared for. There isn’t a blade of grass out of place,” the owner laughs.

Reached via an avenue, protected by electric gates, Roslevin is exceptionally private. Just 45 minutes from Dublin, via the N7, at off-peak times, it is also close to Sallins, for those who prefer to take the train.

Sheltered by trees on three sides, the views open up to rolling fields of tillage land, and beyond. The site, at Mullacash, is on a rise, in the otherwise relatively flat landscape of Kildare, providing excellent views of the Dublin and Wicklow mountains.

“That’s what strikes visitors when they come for the first time, they’re very taken with the view, it’s panoramic, and yet the house is completely private. You can’t see into it, or the garden from the road.”

Roslevin is on the market with Sherry Fitzgerald O’Reilly seeking €940,000.