The space above the new H&M store on College Green has been converted into luxury rental apartments from €3,000pm

College Green Apartments is a new development of eight high-end apartments with unique views of the city centre and a communal terrace garden. They are located in the former Hibernian Bank building, which is also home to H&M. Video: Bryan O’Brien 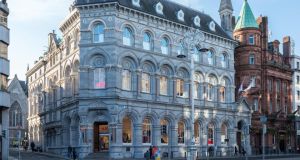 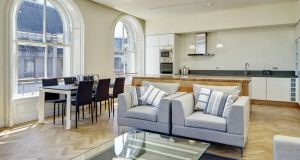 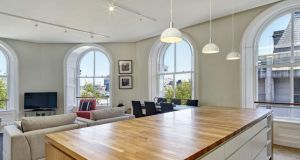 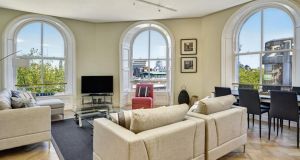 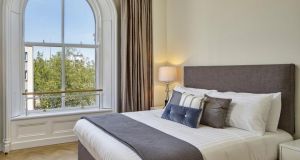 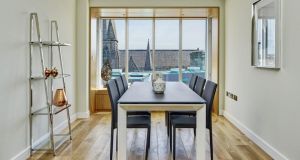 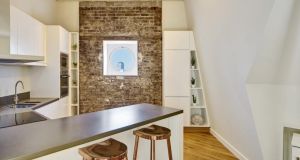 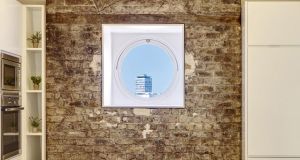 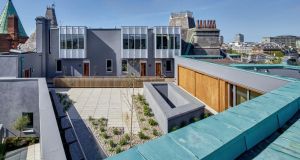 Grandstand views of College Green are the most impressive feature of several of the eight luxury apartments that now sit on top of the new H&M store in Dublin city centre. And even those at the rear have views down Suffolk Street, with the south city skyline and mountains beyond.

Initially for rent, at €3,000-plus per month, the spacious two-bedroom apartments – all 100sq m (1,076sq ft) or bigger – are being targeted at the new breed of executives employed by Google and other tech multinationals who prefer city living.

Developer Clarendon Properties, run by Paddy McKillen and Tony Leonard, initially thought of installing offices on the upper levels of this mid-Victorian building, but opted for high-end residential because they firmly believe that Dublin is now cosmopolitan enough to sustain it. “These floors would have been wasted as offices,” Leonard says. “We wanted to do something that would show what you could do with the upper floors of retail buildings in the city centre.” (In Grafton Street, where nobody lives, such space is vacant or used for storage).

The mid-Victorian former bank building on the corner of College Green and Church Lane has been expertly renovated by Donnelly Turpin Architects – although they were not responsible for the “white-out” interior of H&M contrasting with the “black-out” of Abercrombie & Fitch a couple of doors down. Entrance to the upper level apartments is from the rear, on Andrew Street, directly opposite the former tourist office in St Andrew’s Church. Luxurious feel A passenger lift services the lower floor of apartments, and there’s a separate “universal access” lift to complete the journey to the top floor in the building’s roofspace. There is also a staircase (naturally).

It is clear that Clarendon Properties did not skimp on specifications. Extensive use of French oak, both for parquet floors as well as doors and doorcases give a luxurious feel to the apartments, each of which also has two bathrooms – one with a bath and the other an en suite.

Because of the need both to juggle with the available space and respect the surviving architectural features, almost none of the livingrooms are square. But even this eccentricity adds interest to the apartments, while the views are spectacular.

Where else could you lord it over the old Parliament House, looking down from your eyrie on the opposite side of College Green?

The front of Trinity College is also visible in this breathtaking panorama, as is the campanile of Tara Street Fire Station – and the horror of Hawkins House.

Duplex apartments on the upper level are just like small houses, facing on to a communal roof terrace, with bedrooms tucked in off the entrance and an oak staircase leading upward to livingrooms with picture-window views over the southside to the mountains.

One of the apartments, which faces into the middle of the block, has its own roof terrace as a compensation. But since none of the surrounding buildings are residential, this well-screened terrace is not overlooked, at least after office hours; it would be great for a barbecue. Sprinkler systems Architect Mark Turpin is delighted with the result, though onerous fire safety requirements involved having to fit sprinkler systems in all of the apartments and using plasterboard to box in oak trusses that would have been left exposed in more civilised countries.

Tony Leonard would like to see Dublin City Council relax some of its more rigid rules on fire safety and insistence on “dual-aspect” apartments, to encourage developers to convert the vacant upper floors of retail buildings to residential use.

Depending on the success of its scheme on College Green, Clarendon Properties may replicate the project with other city centre buildings. It has also bought into the Beacon South Quarter in Sandyford.