Adonia cottage in Tinahely ‘captured my heart and soul’, says artist, who renovated it 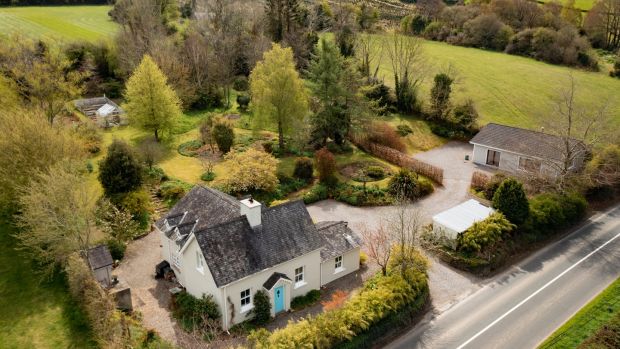 The allure of the Atlantic Ocean and traditional naomhóg boats are taking artist Liam Holden and his partner, Clodagh O’Mara, back to Dingle after 20 years. Originally from Kilkenny, Holden says it was the rugged Kerry seascapes that captured his heart – after studying art at NCAD – which are now a central theme of the artist’s work.

The couple moved to Tinahely in Co Wicklow to be close to family members and ended up staying almost two decades. Their home, a quaint cottage from 1900, was a fixer-up project, which they renovated to a lovely three-bedroom 152sq m (1,636sq ft) cottage. “It was the garage and the gardens that really caught my eye, and I thought the garage would make a great studio,” recalls Holden. This too was converted and now, in addition to a well-lit art studio, it has a bedroom, living and dining space and extends to 73sq m (786sq ft).

The couple started with the gardens, planting trees the week the house was bought. It now has a mixture of native hardwoods, a vegetable plot, a glass house and hedgerows planted specifically to create a home for local wildlife. Holden describes them as wild but low-maintenance.

“It has captured my heart and soul here,” says Holden of their home, “and I would love to move the whole lot of it to Dingle.” But since that is beyond the realms of possibility, they have placed their home on the market through Warren Estates seeking €440,000.

This year, both RTÉ and TG4 broadcast The Camino Voyage, which told the story of a poet, an artist (Holden), two musicians and a stonemason who completed a marine pilgrimage from St James’s Gate on the River Liffey to Santiago de Compostela on the Spanish coast.

The Naomh Gobnait, a traditional boat known as a naomhóg, was built by Holden and his friend, the late Danny Sheehy who, tragically, drowned the year after their voyage, when the boat capsized in the mouth of the River Minho, after being caught by a wave close to the estuary on the Spanish-Portuguese border. The boat is now restored and dwells in the Museum of the Sea in Vigo, which tells the story of the Irish voyage.

Holden and Sheehy, besides building the Naomh Gobnait, also travelled to the Scottish island of Iona in one of these traditional crafts.

“When I first came to Dingle, Danny took me out fishing and introduced me to the wilderness and beauty of the sea, which, being from Kilkenny, was alien to me, and so began my love of all things maritime.”

Having built two naomhógs – which are a recurring theme in his work – at his home in Co Wicklow, he and O’Mara are “cutting off the bow lines” from here and moving back to Dingle, where old friends live and the inspiration for his art truly lies.