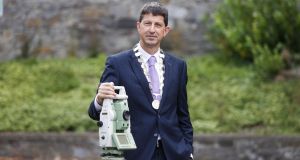 Amid all the upheaval of recent times it’s good to see some normality returning to the property calendar. As autumn looms it brings with it a changing of the guard at the helm of the property sector’s biggest representative members’ bodies.

Wexford-based quantity surveyor Micheál Mahon has been appointed President of the Society of Chartered Surveyors Ireland (SCSI), which counts professionals from both the property and construction sectors among its more than 5,000 members. Only a few short weeks in the job and Mahon hit the ground running in calling for a sustainable construction and property industry if progress is to be made in addressing the housing crisis and Ireland’s infrastructural deficit.

In late July Mahon presented the findings of the SCSI’s Real Cost of New Housing Delivery Report 2020, which found that the cost of building a new three-bed semi-detached house in Dublin has increased by €41,000 to €371,000 over the last four years. As an independent voice for the property sector Mahon has signalled the prominent role the SCSI can play in being part of the solution to the housing crisis which evidently needs all the help and good advice it can get.

Mahon is well known within the industry as founder and managing director of MGM Partnership a quantity surveying and project management practice with offices in Wexford, Waterford and Dublin.

Meanwhile the Institute of Professional Auctioneers and Valuers (IPAV) has named Tom Crosse as its new president. Crosse, who is group director of GVM Limerick will assume the role at IPAV’s annual AGM at the end of August when it takes place in the Bloomfield House Hotel in Mullingar, Co Westmeath.

His appointment coincides with the 50th anniversary of IPAV which represents auctioneers and valuers throughout the State. Crosse has indicated during his term of office that he plans to address the cost of utilities and whether genuine competition exists in the sector and to look at significant conveyancing delays in property sales, a major bugbear within the industry.

In relation to the price of energy Crosse said: “One has to question if true competition exists in a market where some providers can offer discounts of the order of 25per cent.” IPAV says it will be raising these issues with the energy regulator and relevant authorities.

Crosse also indicated he would be raising with banks recent proposals to impose interest penalties on deposit accounts held by members. “Deposits are very much part of the day-to-day running of any auctioneering business and are assumed by members to protect the interest of their clients. Such penalties should not be directed at auctioneers and solicitors’ client accounts, as in the end it’s the consumer who ends up paying,” he said.

‘We poured our hearts and souls into it’: Last orders as landmark pubs and restaurants sell up
6