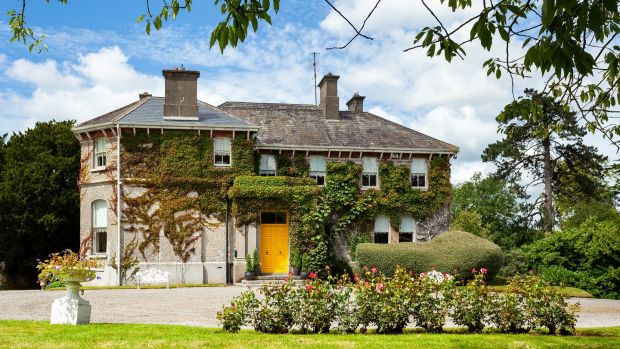 In 1802, prosperous mill owner Charles Going undertook a project that saw the planting of some 197 beech trees, 172 Scotch pine, 135 sycamore and more besides on his lands. While the original acreage went to other uses over the course of the property’s history, the fruits of Going’s work are still in evidence, with majestic mature trees peppered throughout the 22 acres that surround Altavilla, the imposing house Going built in 1790 on the outskirts of the historic Tipperary town of Cahir.

Asking €990,000 through joint agents Colliers and Sherry FitzGerald Country Homes, Altavilla, a 496sq m (5,339 sq ft) property flanking the river Suir, has a leg in both camps of town and country living. Surrounding paddocks lead to informal rose gardens in the more immediate vicinity of the house. The back pastures roll down to the river, where salmon and trout fishing rights have been maintained. The setting is rural idyll, but Cahir town is within easy walking distance.

The arresting property boasts the bonus charm of potential as a stunning family home and/or possible hospitality enterprise. It’s located on what was, prior to the construction of a bypass, a main road into Cahir town. That’s a quieter way in recent years and a limestone wall and grazing land to the fore afford privacy without a sense of isolation.

A former orangery and outbuildings surrounding a cobbled yard to the rear need renovation, but could offer potential in a self-catering venture. The substantial walled garden and raised site of a former tennis court might also appeal to the more commercially minded.

The house itself looks in fine enough order. The three-storey-over-basement was a two-phase construction. The original build took place in 1790, with extension around 1820 in the style of an Italianate villa.

The warm, welcoming ground floor boasts four reception areas, including an ample hallway replete with fireplace. The dining, sitting and drawing rooms are handsome, though the modest kitchen on this floor is rather at odds with the well-maintained classical decor of other rooms.

The kitchen, and the rather incongruous addition of a shower in the hallway on the second floor, are a nod to the practical demands of a vibrant family life. The most recent residents purchased the property in 1959, when gregarious local restaurateur Jim Burke gifted the house to his bride, Mary. The well-known couple, both since deceased, went on to raise seven children in the home, which their son, Jim junior describes as “a magical place to have grown up in”. The house, he says, was a lively spot in its day with regular parties and celebrity guests including Richard Harris and Richard Burton.

The house is immediately habitable, though could benefit from some room layout changes and upgrading in areas. With six bedrooms, a study/seventh bedroom and two rooms in the basement that could lend themselves to use as further accommodation, there is also the original, roomy kitchen in the basement to consider.

Eye-catching original features include ornately carved wooden fascia and brackets, two-over-two pane sliding sash windows, and decorative chimney stacks. A bay window and half-octagonal projection are more prominently visible since the late Mary Burke undertook an impromptu DIY project in recent years. Her son Jim recalls returning to Cahir after a short trip to find that his mother, in her 80s at the time, had decided to start single-handedly cutting back the extensive ivy growth! She was, he says, a very determined woman.

Featured in the National Inventory of Architectural Heritage, where it is described as an unusual 19th-century house in a particularly pleasant setting, with evidence of fine craftsmanship visible throughout, Altavilla is a property abundant in architectural history. But as the current owners attest, it carries its classical heritage lightly, in an atmosphere that is tinged with the personal history of a house that has also, for all its existence, been a family home.