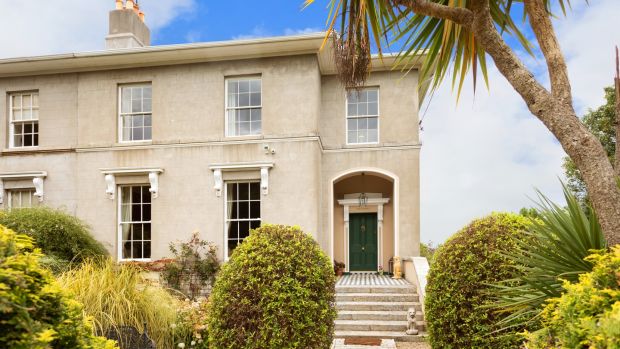 A large Victorian house in Monkstown, Co Dublin, on just over half an acre of landscaped gardens, needed major renovation when the couple who now own it bought it eight years ago. It had had just two owners since being built in 1864 and pretty much everything needed doing. But the new owners, Bronagh Kingston and her husband James, didn’t follow a template for Victorian makeovers while undertaking the lavish refurbishment of their house, Westbury.

They kept a small kitchen upstairs instead of creating the standard open-plan basement kitchen-livingroom, for example, and original floorboards, now a little scuffed by much-loved family dogs.

Meanwhile, they redecorated in grand style: the drawingroom has handmade gold leaf wall coverings, there’s a Zoffany tapestry digital print wall covering in the main bedroom, and silk and velvet curtains on large sash windows in a number of rooms. Original period details of this protected structure – cornicing and coving picked out with gold leaf, centre roses, ornate pediments over interior doors – are intact. The house was fully re-roofed, all sash windows were restored, the basement was damp proofed and underfloor heating installed there. The house also has Cat 5 cabling, security cameras, alarm system and the staircase from the ground floor to the basement was reinstated.

The house is a refreshingly different-yet-traditional take on revamping a Victorian property, presented in meticulous condition. It’s filled with an eclectic and colourful mix of period furniture, art, books and objets, along with baskets of teddies for the couple’s Golden Retriever, Charles, who lives in Westbury with his “dog nanny” when Bronagh and James are away; the couple, who don’t have children, live and work abroad, mainly in Hong Kong, for much of the year. Leaving it is sad, says Bronagh, but it makes sense to move when they come here so infrequently. And Retriever Charles, now older and arthritic, needs a home with fewer steps she says; since they have such homes in the UK, it makes sense to move now.

Westbury, Willow Bank, Monkstown, Co Dublin, a 326sq m (3,500sq ft) five-bed on 0.65 acres with a two-storey 90sq m (968sq ft) coach house that could be converted to accommodation, bought in 2012 for €1.5 million, is for sale through joint agents Lisney and Turley Property Advisors for €3.45 million. There are just four houses – two pairs of semi-detacheds – on Willow Bank, a cul-de-sac off The Slopes, Monkstown, looking down into Vesey Gardens park.

Bronagh says the tall, wide window in the entrance hall, with views of trees in the side garden, was what made her fall in love with Westbury: it’s framed by a dramatic green silk curtain from The Royal Collection Designers Guild, falling from a Houlé brass curtain pole, like curtains in other rooms in the house. “I adore fabrics and colours and would never scrimp on fabrics for the home,” she says.

The drawingroom off the hall at the front of the house has two huge windows with gold-coloured silk curtains, that gold leaf wall covering hand-made in Paris and a white marble fireplace. Books are displayed on chairs and small tables, like the pretty art deco-ish drinks table with On Booze by F Scott Fitzgerald. The diningroom next door has a very tall, wide window overlooking the garden, a carved timber fireplace, a table that seats up to 14 people – and there’s still room for a wine fridge in the corner.

The kitchen has pale green timber units, timber worktops, a Belfast sink, a seven-ring gas stove with white tiles behind it and a table beside a large window looking into the garden. Bronagh is very conscious that a family would likely want a bigger kitchen downstairs and says the large gym in the basement could easily be converted, as it’s already plumbed.

The hall in the basement is floored with black-and-white marble tiles: off it are the timber-floored gym, a utility room – which is also where Charles sleeps – and two double bedrooms and a smart shower room. There is separate access to the front garden through a door with stained glass panels.

The other three double bedrooms are on the first floor, upstairs with books dotting the stair rails. The main bedroom has two huge velvet-curtained windows, a small dressingroom off it that could become an en suite and a wall covered in that Zoffany medieval tapestry digital print. Another bedroom has framed digital print floral wall coverings.

The garden was the standout feature of this property when it sold in 2012, and redesigned and restored by James and maintained regularly by a gardener, it still is. A wide stretch of lawn is bordered by roses, a wall of white hydrangeas and a patio area with a fire-pit; around halfway down, there’s an orchard with apple and pear trees, even a fig tree and rows of silver birch. There’s an olive tree in a spot the owners call their Tuscan corner.

A revolving wooden sun house, more than 100 years old, remains in the garden. The two-storey coach house stands at the end of the garden next to a lane: the lane is owned by Westbury, says Lisney agent John O’Sullivan, but is also used by two neighbouring houses. It’s accessed through electronic gates from Willow Bank which lead to an entrance into Westbury’s side garden where there’s plenty of room to park.

Westbury’s previous owner, who lived there for 70 years, was Noel Purcell, who represented Britain in 1920 and Ireland in 1924 in water polo in the Olympics, and also played rugby for Ireland in 1921.