Ballsbridge banished from board but Dundrum and Nord Anglia school added 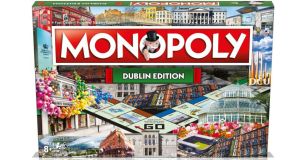 The first official Dublin Monopoly game lands in shops today but the capital’s residential addresses have been wiped from the board in favour of tourist spots and shopping centres.

In the new game, the priciest slots are given to historic or cultural landmarks including the Molly Malone statue and Temple Bar, while the GPO is most expensive buy on the board. An unusual mix of shopping venues also feature including Dundrum Town Centre and salad bar Freshly Chopped in Smithfield, the venue for the game’s launch today.

A previous Ireland edition of the property-buying game focused on Dublin streets with enclaves such as Shrewsbury and Ailesbury Roads occupying the most expensive slots – akin to London’s Mayfair in the original game invented in 1935. But in the new version, the Phoenix Park is now among the most sought after landing spots – try planting a hotel there – and the exclusive new Nord Anglia school, Ireland’s most expensive, also making an appearance, along with St Columba’s school.

According the Dublin Monopoly creators, Winning Moves UK, which is making the game under license from Hasbro, the Phoenix Park was originally set for a much lower ranking but its cachet soared over the summer with Pope Francis’s mass and this “propelled” it up the board. It’s priced at 350 Monopoly dollars (no euros here). The GPO is priced at 400 dollars. The Luas also features, along with traditional tiles such as The Waterworks and The Electric Company but the neighbourhoods are all gone

Rather than dwelling on the capital’s popular suburbs – Rathgar Road, the SCR, Kimmage and Crumlin once featured – the game is themed around tourism, heritage, sport and shopping spots, with Kilmainham Gaol thrown in for good measure alongside the traditional Jail corner.

Dublin Zoo, the airport and the Aviva are there, while players can snap up Arnotts and Brown Thomas but not Dunnes Stores.

Temple Bar, Dublin’s hen and stag party HQ, sits on a yellow block with a price of 280 Monopoly dollars, while Croke Park is a good bit cheaper at 140 dollars.

In what seems like an absolute bargain, or a slight to the sisterhood, Molly Malone can be had for just 60 dollars, while the Ha’Penny Bridge is for sale at the same modest price.

The Community and Chance playing cards are largely Dublin themed too. One card sends players on a shopping spree at Arnotts.

Earlier this year, Winning Moves sought submissions from the public as to what should be included in the new Dublin game. A Dublin charity, Heart Children Ireland topped a public poll to be featured in the new game and has a Community Chest space all of its own.

‘At night I would go to my room to quietly drink.’ Irish women and addiction
7