Driven batty: The scary reality of bats in your house

Bats are everywhere at Halloween, but it’s no treat when the real ones move in 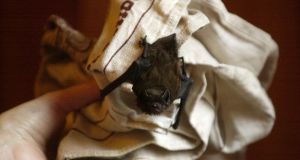 Carefully pick up the bat (if you dare!), put it in a shoe box, and find a dark, safe spot in a bush or tree where it can continue sleeping. Photograph: Alan Betson/The Irish Times

It’s nearing that time of year when houses up and down the country will be flooded with bats – of the novelty variety, as our winged friends go hand-in-hand (or wing-in-wing) with ghosts and ghouls during the Halloween season.

And while rubber varieties add to the spooky festivities, the reality of having real live bats in your house is a totally different story.

I live in a wonderful location surrounded by trees and wildlife; not long after we moved in, we would take our then young boys on “bat hunts” in the evenings as we walked up the laneway and they delighted in watching the creatures swooping and diving as their hunting expeditions got under way.

But it didn’t take us long to realise that we didn’t have to actually leave the house to see bats, because they had moved lock, stock and barrel into the cracks between the facade and the fascia and soffit; suddenly their nocturnal antics seemed less than appealing.

Of course, they are a protected species, so there was precious little we could do about our new lodgers until they decided the time was right to move on. So every evening as the kids were going to bed, we would hear a cacophony of noise as the colony woke up and got ready to fly off into the night in search of food.

At first it was entertaining to watch through closed windows as they squeezed themselves out of the tiny cracks and flew off about their business. But before long, the window sills all over the house were littered with droppings – as were our cars below. Not only was it unsightly, but it left marks on the sills and was difficult to clean off upper windows.

Then to make matters worse, they started making their presence even more felt – by coming into the house. On the first occasion my young son woke us up in the middle of the night to say there was a bat in his bedroom. Initially we were sceptical but, sure enough, on inspection, it was flying around his room in a precise circuit, possibly looking for a way out.

I’m ashamed to say that I hot-tailed back under my own duvet (with one small boy by my side) while my other half opened up the windows, turned off the light and waited for the utterly harmless creature to depart.

The next time one broke in during the day – and I very nearly picked it up off the floor thinking it was a pair of black socks balled up. But thankfully I realised just in time and on this occasion got onto batconservationireland.org to find out what I should do.

The advice was to find a shoe box or something similar and – wearing rubber gloves (this extra advice was my own) – to pick up the bat and place gently in the box. Then take it outside and find a dark, safe (high enough to be hidden from cats or other small animals) bush or tree and put the bat down to continue sleeping until evening.

This time I got by with a little help from my sons, and the mission was accomplished successfully – and, on subsequent occasions, we knew what to do.

But it wasn’t an ideal situation. On one evening we stood outside and counted well over 100 bats flying out from the rooftop of our house – so, on advice from the experts, we decided that when they moved on during the winter months (to find better shelter in caves where they huddle together to hibernate while the weather is cold), we would block up all the cracks but put bat boxes in the trees (furthest from the house) so they could move into alternative accommodation on their return.

We had only been in our house for a couple of years at this stage and we rang the man who built it and asked him for advice. He said he would come out and assess the situation and then fill in the cracks (providing the bats were all gone) himself as it wasn’t such a big task.

And, to give him his due, not only did he stick to his word and come out to do the job in jig time, but also didn’t charge anything for the work as he felt it was something which should have been done from the outset. What a gentleman.

So we had a quiet winter and, when spring arrived, we waited for the annual return of our batty friends, but nothing happened. They seemed to have assessed the situation and, upon checking out the alternative lodgings in the garden, decided they were adequate because although we could still see them flying around the garden at night-time, there were no droppings to be seen, no squeaking as they woke up and no scratching noises as they exited in droves.

This was a great result all round – because we love the privilege of seeing these creatures in their natural habitat, but just don’t want them in ours. So if anyone else has been plagued by a family of bats in recent months and years, my advice is to get on to your local bat conservation officer and then find a friendly builder. Happy Halloween.