Mould has appeared on our guest bedroom wall. What should I do? 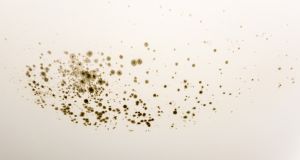 I live in a south-facing, semi-detached, two-storey house built around 1929. I’ve lived in the house for the past 50 years. Historically I used to have damp walls in the west wall, downstairs only. In the mid-1980s I drylined all the external walls of the house and to the best of my knowledge no ventilation was included.

Curiously, in the west-facing bedroom wall upstairs is a hip roof. Along the hip part I have black mould appearing along a trajectory. Interestingly, it has only appeared there recently, possibly since the room has become a guest room.

I guess I’ve always felt worried as to what might be happening inside the drylining all these years and the appearance of this mould is frightening. I would be very grateful for any advice or guidance on this matter.

I note the fact you had the walls drylined in the 1980s but you haven’t given any details on the type or depth of insulation. However, given that this was done in the 1980s it will have been of a relatively low insulation standard compared with current standards. I also note it is unlikely that ventilation was provided, though this was all a very long time ago.

I see also that the issue is arising on the west wall and although you do not say it, I am fairly certain that this is the external/side wall based on your reference to the hip. Accordingly, this is the coldest part of your house, being exposed to a significant area of external surfaces including two external walls and directly under the roof. As a result, this is one of the most likely places for mould growth to occur within the house.

It is also interesting to note that the room has recently become a guest room and hence I anticipate that this is only used occasionally. The interesting thing here is that condensation, which ultimately gives rise to mould growth, will most likely occur in the colder and generally unused parts of the house as these areas tend to be poorly heated and ventilated. Even everyday activities such as opening windows and doors encourage air movement, thereby reducing the risk of condensation occurring.

Interestingly, the first three of these can be quite easily controlled by daily activities and good habits such as controlling the production of moisture vapour and improving the levels of ventilation and heating, all without giving rise to the need for any significant capital expenditure. If the problem still persists after this, then you need to look at upgrading the thermal insulation standard to include either upgrading the insulation standard within the roof or by re-drylining the walls with a better quality/higher standard of insulation and this will involve both disruption and capital expenditure.

At the moment, the mould you describe appears to be a surface mould and while this does appear unsightly and can in certain – albeit rare circumstances – be harmful to health, more often than not it is just an issue of aesthetics. Usually the mould can be cleaned off and the surface disinfected prior to redecoration after the causes have been addressed.

There are, however, instances when one can have interstitial condensation ie condensation within the structure or behind the lining and no doubt this is the ongoing concern that has been niggling at you over the years. The only real way to establish this would be to undertake some opening up work and to investigate the structure behind the lining. However, given the symptoms you are describing together with the history, it is most likely that this is just a surface mould, which apart from being unsightly is unlikely to be of major concern.

However, as this diagnosis is based on a lot of assumptions, for the avoidance of doubt you should have the matter investigated by your local chartered building surveyor who will be able to draw up firm conclusions based on the actual findings and to make specific recommendations for the treatment and eradication of the problem.

Val O’Brien is a chartered building surveyor and member of the Society of Chartered Surveyors Ireland, scsi.ie

Paul Flynn: A wonderfully easy and logical way to feed your family
7