Stringer home off Orwell Road with lots of scope for €1.195m 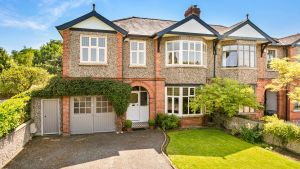 In the 1930s Thomas Stringer was one of the most active and popular builders in Dublin, becoming known for his solid, spacious family homes. The plots he built on tended to be generous, so the properties typically have good gardens front and back, while interiors have ample accommodation including roomy bright halls and landings – always the sign of a builder with space to spare.

Number 4 Braemor Park, off Orwell Road in Churchtown, is an executors’ sale having been in the same family for more than 50 years. The semi-detached house is easily recognisable as Stringer-built with its mix of brick and pebble dash, bay windows to the front and deep porch with leaded windows.

It has 180sq m /1,937sq ft, not including the garage which new owners will probably wish to incorporate into the living area when they modernise and enlarge the kitchen. And it does need some updating – though new windows recently installed show that it has been carefully maintained over the years.

Upstairs are five bedrooms, three doubles and two singles, the bathroom and toilet are separate and in keeping with the style popular when house was built. In these houses, renovating new owners tend to make one of the small bedrooms an en suite for the main bedroom and knock the wc and bathroom together to make a larger room. Some of the bedrooms have their original fireplaces.

The living accommodation has two interconnecting reception rooms – the rear, used as a dining room, opens into the back garden. The small kitchen – retro fans will appreciate the custom-built units – opens into a breakfast room. This is a layout that will probably change if new owners opt for an open-plan modern kitchen – there’s certainly enough space.

Extending out into the southeast-facing back garden won’t greatly impact on it as aside from being wide it is 135ft long and not overlooked. At some point there was a large greenhouse half way down the garden – it’s clear from the mature colourful beds filled with shrubs and flowers that this was the home of a keen gardener – but just short walls remain and it has been repurposed as a large enclosed herb garden with raised beds. There’s off-street parking to the front for a couple of cars.