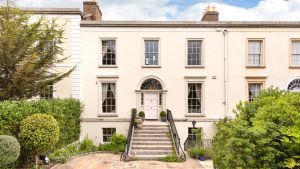 Much has changed beyond the colour of the front door – from austere black to cheery pink – at the Victorian Rathmines townhouse at 3 Leinster Square in the four short years since it last changed hands.

It sold in 2016 to the present owners, who were moving up from Wicklow to give city living a try, buying the double-fronted two-storey property for €1.1 million. Then it was an executor’s sale on the part of the estate of the previous owner, who had bought it in 1998, when it was in very poor condition. She sympathetically renovated and restored every part of the handsome property, from the stunning original fanlight in the door right up to the roof.

In 2016 it was a two-bedroom house with a very large bathroom; the family here now live in it as a four-bed, having changed the upstairs layout to create a third bedroom and giving another bedroom an en suite, and they use one of the fine reception rooms at hall level – there is one on either side of the front door – as a fourth bedroom, partially dividing it to make space for a family bathroom accessed off the hall.

Downstairs at garden level – there is also access under the granite steps – is a comfortable family room opening to the rear patio garden to one side and to the other the kitchen, which opens into the house’s only extension – a single-storey room that was used by the previous owner as a sunroom but is now a dining room.

The 1990s decoration, which featured strong colours and a great deal of stripped pine, is gone, replaced with soft greys and plenty of strategically placed mirrors – including mirrored panels inset into the back of the front door.

These are grand houses, set back from the road and with off-street parking for three cars to the front. These were built in the 1840s, before it was called Leinster Square and was instead made up of two terraces, Ulster and Connacht and access was via a gate on Rathmines Road.

What they don’t have is rear gardens to match their style and scale – the paved patio garden at No 3, which has plenty of place for a large table and chairs and some attractive planting, backs on to Leinster Road. Having previously been used to a lot of outdoor space, the family are hoping to move back out of the city and have put the house on the market through Lisney seeking €1.295 million.