Refined comfort and leafy views from Rathgar classic for €1.25m 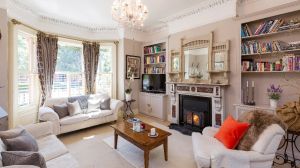 The redbrick-lined roads of family-friendly Rathgar still look much the same as they did when these early Edwardian terraces were built.

Inside most tell a different story. Many have been modernised to the point where their original features no longer retain quite the same formal elegance they had when first constructed.

Number 27 Victoria Road, a four-bed terraced home of 202sq m/2,174sq ft, has managed to marry old and new and retain a sense of refined comfort through its classic styling without feeling old-fashioned.

The house was modernised about 15 years ago when the owners installed new double-glazed timber sash windows, later adding plantation shutters for additional privacy. The rooms at hall level have fine ceiling heights that soar above 3.2m and subtle plasterwork bringing texture to their cornicing and ceiling roses. The hall and return are floored in a pale oak while the interconnecting reception rooms – living to the front where there is a bay window and dining to the rear – have deep-pile carpets.

These are fine square rooms accessing each other via fold-back doors sitting flush to the wall and extending to over 16sq m in size, big enough to entertain but not too vast for everyday family life.

Three well-stuffed sofas, upholstered in linen, are set around the fine grey and coral red fireplace in the front room where a stove has been inset into the period surround. There is an open fire in the dining room with a similar marble surround.

To the rear is a linear kitchen with glass on three sides and a periwinkle blue Aga as its focal point. The eat-in room has space for a table for six as well as a small island and opens out to a covered courtyard floored in honed, limestone tiles. The glazed and beamed roof lets year-round sunshine through but provides shelter from the elements.

Set in lawn, the pretty garden has a smart shed and some raised beds. Northwest-facing, it overlooks the green fields of Stratford College and the mature trees that surround it. This makes it all feel wonderfully private.

On the hall return there is an extravagantly large bathroom with a freestanding bath set in front of the window. When one is immersed, the view is of green fields only.

There are three doubles on the first floor. The smallest of these is used as a good-sized home office. The main bedroom is to the rear of the house and has a shower en suite. On its return is a small storage room big enough for use as a second office, potentially appealing given the rise in numbers working from home and where two family members might require private spaces to work in and take calls.

At the top of the house is an attic room that is original to the property. This is a fine size and has good ceiling heights. Lit by a large roof light it too has a shower en suite and would make a great space for a teenager. The property has an E1 Ber rating and is seeking €1.25 million through agent DNG.

On the same side of the street, number 9, also a four-bedroom house, was asking €1.395 million when it came to market in May 2019. It had a similar layout, save for its kitchen, which extended across the entire width of the plot and had underfloor heating and a B2 Ber rating. Slightly larger at 222sq m/2,389sq ft, it sold last November for €1,377,500, according to the Property Price Register.