Make a move to Sallynoggin where homes don’t hang around 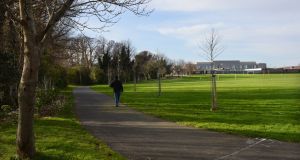 Sallynoggin may not be a “destination” neighbourhood like nearby Dún Laoghaire, Dalkey, Monkstown, Killiney and Glasthule, but this spells good news for homebuyers. In fact, on early 20th-century maps, Glenageary and Sallynoggin were pretty much one and the same. “Underestimated” and “overlooked” often translates in the current market as “not short of bargains”.

Essentially, house buyers get to enjoy proximity to these more “desirable” addresses and their myriad amenities, but without the eye-watering price tags. And yet, Sallynoggin very much has its own identity, with a longstanding group of residents who take great pride in the neighbourhood and hold tight to the name. Traditionally, the area was a quiet working-class neighbourhood, but as happened with Monkstown Farm and Ballybrack, a young set of upwardly mobile professionals are wising up to its obvious appeal.

The area consists mainly of former local authority housing built between the late 1940s and the mid-1950s by Dún Laoghaire Borough Corporation. For prospective buyers, there is a nice stock of old council houses that have the square footage that many families need; as an added bonus, they’re usually well built and well insulated.

Sallynoggin is a bit of a trek to the Dart, but most of these nearby coastal villages are still under a half-hour walk away. All the tranquillity of life near the sea, yet without the throngs of visitors; and if you’re working in Sandyford or Dundrum, your commute is fairly straightforward, too.

Tranquil can verge on too quiet for those hoping to live near a hub. Many locals would like to see more cafes and restaurants spring up in the immediate area. The presence of giant retailers like Woodies and Power City often brings plenty of traffic to the area on weekends, making getting around a bit of a mild annoyance.

You need to be quick to avail of what comes on the market, as available properties in the immediate area don’t come up all that regularly and usually sell in jig-time. 34 Sallynoggin Park (€399,000, via Place Estate Agents) is a three-bedroom end of terrace in need of sprucing up, yet with sizeable gardens not overlooked at the front or rear. The well-presented 88 Glenageary Avenue (€725,000, via Brady & McCarthy) has an above-average price tag for the area, but is a five-bedroom, three-bathroom house with an attic conversion and almost 200 sq metres of living space.

Closer to IADT Dún Laoghaire, 77 Kill Avenue has a Dún Laoghaire address (€595,000, via Sherry Fitzgerald Dún Laoghaire), but is a spacious four-bedroom that’s less than a kilometre to the very heart of Sallynoggin.

Again, certain estate agents are wont to describing Sallynoggin properties as being in Glasthule or Dún Laoghaire in their advertisements. A two-bedroom property can cost about €1,600-€1,800 per month, which is well below the average rental tag in Dún Laoghaire proper.

The Sallynoggin Inn in Sallynoggin Road is a bit of a local institution, while in nearby Deansgrange, Baker’s Corner (Kill O’The Grange) and The Grange (Deansgrange Road) are good for cosy local pints. Some great takeaways service Sallynoggin, from Happy Times (2 O’Rourke Business Park) to fish & chip favourite San Siro (9 Church Place). The immediate area is evidently crying out for a neighbourhood brunch spot or go-to bistro, but dozens of these are in nearby Dún Laoghaire.

Playing fields on either side of Sallynoggin Road, not to mention St. Joseph’s Boys AFC, are ideal for sporty families. There’s a Lidl in the village for the big family shop, and Sallynoggin Youth & Community Facility welcomes those in the area aged between 10 and 18.

Glenageary Dart station is about a 20-minute walk from the heart of Sallynoggin – a trip into town this way can take about 40 minutes. Dublin Bus routes that reach Sallynoggin include the 7, 7A/B, 45A and 111, which goes to Dún Laoghaire. The network is described by locals as “reasonable”, although there’s a hope that things will soon improve with the implementation of the BusConnects programme.

“I moved to a house in Sallynoggin in late 2018 from a fairly soulless apartment complex in Cabinteely and I couldn’t be happier with my move. Sallynoggin has a lot going for it, but it is the neighbourhood’s strong sense of community that I would rate above anything else. By and large, the locals go out of their way to look out for each other, including their new neighbours. And you don’t have to look too hard to see the care that the majority of people take in looking after their homes and gardens.

In terms of amenities, Sallynoggin has a number of small supermarkets and other local businesses such as gyms, Woodies and Power City. It’s a short walk to the seaside town of Dún Laoghaire and other south Dublin neighbours such as Glenageary, Cabinteely and Glasthule.” – Eleanor Mary, civil servant.

Do you live in Portobello? If so, please tell us what it’s like to live there. Do you have a favourite place or a pet peeve in the neighbourhood? Email: homeanddesign@irishtimes.com

Palmerston Road redbrick brings its A game for €3.25m