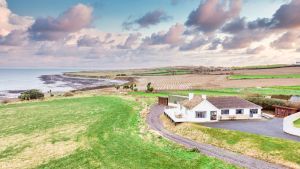 North Co Dublin is the capital’s market garden and from the windows of Island View, Holmpatrick, on the outskirts of pretty seaside town Skerries, you can see the furrowed rows that, later in the season, will sprout spuds or greens for the supermarket shelves. The property allows city folk a rare close up of working farms.

Property watchers might recognise the detached bungalow for a property that last came to market as a dated three-bedroom house set on 5.6 acres. This was in April 2016, when it was asking €1.3 million. The house, minus five acres of the lands, sold for €875,000 in March of the following year, according to the property price register.

Now the updated four-bedroom property, set on just 0.6 of an acre, is asking €950,000 through Sherry FitzGerald Cumisky.

The owners have blitzed the bungalow to give it a whole new look. They have changed many of its windows, integrated the garage to create a large space in a bright and west-facing utility room which is bigger than most kitchens, and extended to the back to add a vaulted, timber-built master bedroom.

The tongue-and-groove ceiling has been lime-washed and the bed is positioned to face the rising sun and a wall of glazing which includes patio doors out to a deck, framing a vista of the three islands.

Shenick is home to a Martello tower; Colt and St Patrick’s are beyond, with the latter said to be where our patron saint set up his first monastery in 432. Beyond these is Rockabill, a lighthouse whose pulse will lull you to sleep at night.

The refurbishments included extending into the attic where there are two good-size rooms with Velux roof-lights, one on either side of the steep stairs, as well as plenty of storage under the eaves.

They installed a deck to the side of the property where you can drink in the sea views, and watch the colonies of seabirds, in what is a special protection area. A pair of binoculars will get you up close to the antics of cormorants, oystercatchers, purple sandpipers and Brent geese.

The rest of the house, which is laid out in the typical fashion of its 1970s era, has a dual-aspect living room to the left of its hall with a door leading through to the eat-in kitchen.

There is a glass conservatory off it but it needs a glazing upgrade. While the house has been aggrandised, its Ber rating of G remains as it did last time it came to market.

Outside, there is a small timber home office to the front, and down a level to the rear a sizeable shed, as well as a larger timber garden room. The field to the side of the property forms part of a separate sale through agents CBRE.

These lands, 4.16 acres, are zoned “high amenity” and benefit from road frontage directly onto the Rush Road. Lot two extends to 19.4 acres and abuts the house on two sides. Zoned open space and high amenity it has direct access to the seashore, landlocking the house. Lot one extends to about 6.46 acres and is zoned residential.

Collectively, the three lots are asking €4.5million through CBRE.