Best in Class: Brush up with these new paint shades from pastel pink to jungle green 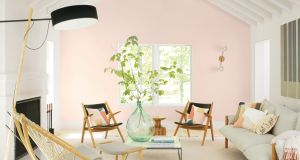 While dark colours in paint are still selling strong what is apparent is that the mood has lightened. The dark shades that looked great in two-dimensional editorials used richly pigmented, expensive paints, that just didn’t translate when homeowners went to their local supply shop and ordered a generic version. The paint didn’t have the same depth of colour and was also difficult to apply. This may explain the rise of the pastels such as First Light, a pale pink from American paint company Benjamin Moore. And that’s precisely the point. It has the rosy glow of winter mornings but while it looks a little low key here in print it works really well in real life in visually warming up cold rooms, especially those that may be north-facing. It’s a very versatile pastel that can be used to great effect too above the picture rail and on ceilings in period homes to highlight the lofty ceiling heights and in bathrooms will go some way to dial down the sterility of a white space. This paint brand is richly pigmented and so while pale it gives really good colour coverage. The flat finish for walls costs from €60 per American gallon or 3.8litres. It isn’t recommended to use with lime plaster. An eggshell finish costs from €65 to €110 for an American gallon from MRCB. mrcb.ie; benjaminmoore.com.

Arctic Bay is one of the new smooth impasto colours at Porter’s Paint, an Australian brand set up by Sydney house painter Peter Lewis who started mixing lime washes in accordance with the notes left in diaries belonging to his grandfather, an Irishman named Fred Porter who built some of Sydney’s landmark buildings. This range is characterised by its lack of uniformity. There’s a distinct layering of pigment and subtle but visible brush marks that gives a very matt, non-reflective sheen that has a velvet opaque finish that is easy on the eye. The super smooth texture works well with suede furnishings and rugs underfoot. The finish also detracts from imperfectly plastered walls. Pictured is Arctic Bay, a deeply restful glacial green that has a lot of grey in it that will work well in dark rooms. Crossmaglen-based McAllister Interiors is the distributor in Ireland where four litres of impasto costs about €234.mcallisterinteriors.com; porterspaints.com.

Annie Sloan Chalk Paints is rocking the dark side with its new colours, Athenian Black and Oxford Navy. The former is an homage to the true black used to render silhouettes and scenes in ancient Greek ceramics while the latter is a deep inky blue inspired by Oxford University’s insignia in the paint company’s home town. Here the navy is seen on a pantry and on kitchen walls up to the dado rail. The bentwood chairs are painted using Barcelona Orange and teamed with a graphic print tiled floor. The paint, which can be applied directly to walls, floors and furniture without first having to prime them, costs €29.95 for a one-litre tin. Contact Nenagh-based Twenty Six to get details of your nearest stockiest. anniesloan.com; twentysix.ie

Crown Paints serve up a richly pigmented offer that will work as well in contemporary homes as in a period home, pictured. On the walls here is Into the Blue, a restful blue that is new for 2020. It comes in a flat matt emulsion that is a halfway house finish between typical matt and sheen so it adds a point of interest to the wall texture. The dado rail is picked out in a soft white in this kitchen scenario where the unit doors are coated in Revival, a soft mint green, that riffs well with the warm blue. Either will cost from €24.99 for 3.5 litres. Ballet Shoes, while not new, is the accent colour, brought in to delineate the splashback from the wall. As a result prices for it are slightly cheaper, starting from €24.99 for 2.5 litres. crownpaints.ie.

Tranquil Dawn is Dulux’s colour of the year and it’s a very doable pale green, the kind you will soon see in early spring shoots. It’s great for rooms that get a lot of direct sunlight, especially when teamed with soft warm whites but will feel cold in north-facing spaces. It’s easy to work into existing colour schemes too and will work with existing pale greys to help freshen them up. You could try it on architraving and woodwork to pick out the detailing as a way of refreshing a room. Behind the scenes Dulux’s team of creatives put a lot of energy and time into creating other less easy-to-sell colour combinations that are also worth a look – for those that would like a home that feels less on trend but very polished. These include this offbeat pink and green combination that fuses Dulux Burnished Brass, a ripe green with a lot of yellow, and Heartwood, a dull mid-century pink and really helps to pick out wall detailing such as the panelling pictured. These cost €46.95 for 2.5 litres of the paint company’s diamond matt, the hardest-wearing formula.dulux.ie

Farrow & Ball’s latest range, Colours of Nature, chimes with the times in that it is a collaboration with London’s Natural History Museum and all the colours are inspired by animal, mineral or vegetable finds from the glass cabinets of this Victorian treasure. The shades include, Ash Grey, a cool arrowroot neutral that is a very subtle but ontrend way to help pick out period features and works really well when teamed with rich creams and tans; Brocoli Brown, a rich earthen colour that still manages to bounce light in a room that has a southern aspect and Lake Red, a cool red that many will dispute is actually a rose pink. It is a fantastic colour to use in small spaces and will feel energizing and dynamic when used across walls, woodwork and ceilings. It is also wonderfully surprising when used inside cupboards, like that of the lipstick red soles of Christian Louboutin’s shoes. Five litres costs €150. farrow-ball.com.

In its Pantone range, Irish paint company Fleetwood, which is a licensee of Pantone on the island of Ireland, launches Infinity, a soft mid-denim shade. This is a warmer and softer shade for walls to wear than the forecasting company’s colour of the year for 2020, Classic Blue, which is a warm tone of royal blue. It’s been 20 years since Pantone debuted the idea of a colour of the year with Cerulean, a shade that launched a new millennium. Now every company in the pigment game has an opinion and a colour that it calls its own. The washable emulsion pictured is a warm mid-denim blue, like your favourite pair of jeans and is teamed with Pantone barely blue on the skirting. Five litres costs €82.50. fleetwood.ie/pantone-range/.

Little Greene’s National Trust colourcard included several important greens from its archive including the Harley Green, 312, pictured in the units below shelf and wall return, which was a feature of the library Wimpole Hall, the largest house in Cambridgeshire and built in the 1640s. The library was designed and built between 1716 and 1721 to house then-owner Lord Harley’s vast collection of 50,000 books, 8,000 manuscripts and reputedly 350,000 pamphlets. The upper wall is painted in Tea With Florence, 310, inspired by the Chinese Room of Claydon House in Buckinghamshire, considered to be the finest surviving example of Chinoiserie in Britain. Here, eighteenth-century travel and international trade had given rise to an obsession with Asia and inspired the popular new ritual of tea drinking. Generations of Verneys used the Chinese Room as a private sitting room, and for taking tea with visitors, including Florence Nightingale, sister of 19th-century owner Lady Verney. A 2.5 litre tin of intelligent matt emulsion costs about €60 from Stillorgan Décor. littlegreene.ie; stillorgandecor.ie

Bring the outside into your hall with Colortrend’s Jungle Adventure, a strong but warm shade of green that really helps to make an entrance when used on the stairwell as pictured. It works really well here in an Edwardian house when the banisters and handrail is contrastingly picked out in an antique creamy white. Five litres of emulsion costs €85 from MRCB. Colortrend is one of three paint brands belonging to The General Paints Group. The other two are Curator, a luxuriously pigmented older sister and Sustain, a professional range that is used in hospitals and on landmark buildings such as the recently refreshed Ha’Penny Bridge. The paint company recently acquired a retail presence by buying the much-loved pro shop MRCB Paints & Paper. colourtrend.ie;  mrcb.ie; generalpaintsgroup.com.