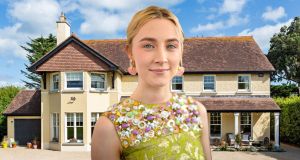 Having already blazed a trail in the world of film, with her first Oscar nomination at the age of 14 and the Golden Globe award for best actress in 2018, it looks as though Saoirse Ronan is a force to be reckoned with in the property market.

Just eight weeks after putting Pine Lodge, her home in Greystones, Co Wicklow, on the market, at a guide price of €1.5 million, the Carlow-born actor has secured its sale for just over €1.6 million.

Although the sale of the Edwardian-style property is understood to have attracted significant interest from an array of potential purchasers, including another well-known Irish actor and a leading sportsperson, the buyer of Pine Lodge is a private individual.

Quite apart from securing an impressive five-bedroom, five-bathroom detached house extending to 450sq m (4,840sq ft), the new owner of Pine Lodge stands to benefit from the stylish makeover it has seen under Ronan’s fleeting ownership.

The Hollywood actor, who is being tipped for a fourth Oscar nomination for her new film, Little Women, bought the property from its previous owner, Alan Gray, the economist who was the crisis-era confidant of the former taoiseach Brian Cowen, for €1.4 million only on September 29th, 2017.

She then spent a small fortune to transform the 1970s house into a home befitting a star. When bringing the property to the market, last September, Galvin Property said: “The layout and finish will impress even the most particular and comes to the market ready for the new owners to move in, and invite their family and friends to ‘ooh and aah’.”

Commenting on the kitchen, the selling agent added: “The current owner has painstakingly designed and decorated this open plan room so to be practical, comfortable and aesthetically impressive all in equal measures.”

A bedroom close to the master bedroom has been turned into a large walk-in wardrobe, with a “luxurious en suite bathroom with separate shower comparable to a hotel suite in uptown New York”.

Having received her first Oscar nomination at the age of 14, for her role in the film of Ian McEwan’s novel Atonement, Ronan secured the Golden Globe for best actress in 2018 for her title role in Lady Bird, directed by Greta Gerwig.

‘Moving overseas is daunting, but he took it in his stride’: An Irish woman walks for her dad
7