Make a Move to . . . Ashbourne: more than just a commuter town

It's a hop from Dublin's city centre, but there's plenty to stay local for 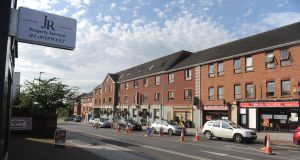 Once upon a time, Ashbourne in Meath would have been considered as “way, way out”, but not anymore. Property prices are still lower than in Dublin and, with the wind behind you (and traffic in your favour), it’s possible to get into the city centre in a 40-minute drive. Yet the handy commute to the city isn’t its only main draw.

The Royal County is famed for its stud farms and wealth of green, rolling hills, and Ashbourne offers residents the chance to mainline into country life, while still being within reach of the capital. There’s plenty to like within the commuter town: with a population of about 15,000 (the county has seen a reported 16 per cent increase in denizens since 2006), Ashbourne has seen a bounty of amenities pop up as the town grew exponentially in recent years.

Frederick Street is still its best-known arterial road, but Killegland Street provides a new hub for the town, and is thriving thanks to a new library, gyms, coffee shops, the Showtime cinema and various supermarkets (all the greats are there including SuperValu, Tesco, Dunnes, Aldi and Lidl).

Also, what’s not to like about a village that pretty much has its own theme park, and one that pays homage to a famous crisp to boot? Complete with a zoo and ice-cream parlour, Tayto Park stands about a mile outside the town proper.

Locals lament the lack of a train service, and a go-to playground or green space for little ones. Be prepared, too, to buy heavily into car culture as an Ashbourne local.

Several new developments have come on stream recently, and a sizeable amount of land has been zoned for residential development. Fifty per cent of Ashbourne’s housing stock has been built since 2000.

Apartments such as those in the Killegland Hall complex could well be your best bet, as rental properties often become available in Ashbourne’s newer blocks regularly. Expect to pay about €1,500 per month for a modern two-bed, two-bath, and €1,800-€2,000 a month for a three-bed, two-bath apartment.

Choose from a slew of newish independent outlets: Chez Emily (Ashbourne Court, Main Street) is a boutique spot offering the sort of handmade Belgian chocolates that are worth the trek.

La Bucca on Frederick Street, with its award-winning Mediterranean menu, is something of a local legend, and offers pizza-making parties for kids.

The Deli Store (Murtaghs Retail Park, Frederick Street) doesn’t have much seating space, but their coffee and sandwiches are a great lunchtime option.

Fancy a pint? The Snailbox (Kilmoon, Ashbourne) is a gastropub with cosy open fires and great views, while Kelly’s (Main Street) is beloved of dyed-in-the-wool locals. Elsewhere, EatZen (1, Killegland Crescent), Fifty50 (Milltown) and the New Leaf Cafe (New Town Centre) are also worth a punt.

There is plenty of scenery and fresh air within reach: Newgrange is a 20-minute journey away, and a little further is the gorgeous beach at Bettystown (as well as Portmarnock to the south). The area has also received a huge boost with the recent opening of the Foroige Ashbourne Youth Centre. There are plenty of schooling options on offer, too: the two secondary schools are De Lacy College (multi-denominational, mixed) and Ashbourne Community School (multi-denominational, mixed).

Meanwhile, parents of primary school children can choose from several options. Among them are Ashbourne Educate Together (multi-denominational, mixed), Gaelscoil na Cill (Catholic, mixed), St Declan’s (Catholic, mixed) and the newly-opened Ashbourne Community National School (interdenominational, mixed). Gaelscoil na Mí is the largest primary Gaelscoil in the town and the second largest provider of multi-denomination education in the town. It shares the education campus with Coláiste de Lacey, Ashbourne ETNS and Ashbourne CNS.

The town is handy for jumping on to the N2 and the M50 (which is 10 minutes away by car). Ashbourne was once a notorious traffic bottleneck, but the opening of the bypass in 2006 sorted that out.

As commuter towns go, Ashbourne is well-served by public transport. Ashbourne Connect’s service is both regular and speedy. Bus Éireann offers a route to Dublin Airport, while you won’t wait any longer than 20 minutes for a 103 bus to or from Dublin city centre.

“I’ve lived here most of my adult life, and it’s been amazing to see the town expand and to see an influx of people come here from all walks of life. My kids get good mileage from the various sports clubs and having a cinema nearby is a godsend. Ashbourne has a lovely buzz about it these days, and it’s more than just a suburb to get into the city easily from.” – Louise Carroll, civil servant