Electric avenue? Not for the new car owner on this smart NCR terrace 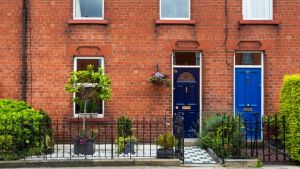 This article is 5 months old
View this property listing

Ellesmere Avenue, a quiet little street just off bustling North Circular Road in Dublin, is a 10-minute walk to both red and green line Luas stations, and served by three bus routes. In addition, the city centre is just a 15-minute walk – taking the shortcut through the new Grangegorman campus.

The oldest part of the avenue is lined with neat terraces of redbrick houses dating from the early 1900s.

Number 19 was bought by the current owner in 1998, when it was a series of small pokey rooms. Since then the entire house has been renovated and extended and now has 134sq m (1,442sq ft).

“When we were renovating we tried to reuse, reclaim and recycle a lot of the interiors to try and retain the character of the house,” says the owner.

The old redbricks from the interior are now used in the sunny rear courtyard, laid in herringbone fashion, and were also used to clad the exterior of the extension.

The property still retains many of its original features such as old fireplaces and coving, with some reclaimed additions such as Georgian doors which are now used in both reception rooms to the front of the house.

What is remarkable and, indeed, deceptive from the exterior is the house extends to 134sq m (1,442sq ft), giving three large bedrooms, which is quite unusual for properties such as these.

Normally the bedroom on the return in these houses are box rooms, many of which are turned into bathrooms. Not here – it is a full-sized bedroom adjacent to a full bathroom complete with a free-standing bath.

A Jack and Jill en-suite was added to the two bedrooms on the first floor, and designed in a clever way so that the rooms still retain their shape and size. The principal bedroom is particularly impressive as it occupies the entire width of the property.

The kitchen and informal dining area open out to a sunny patio, the walls of which are swathed in climbers, including jasmine, clematis and passiflora, and it is a really quiet outdoor space considering its central location.

The owner’s reason for moving is an unusual one, but something that will affect more and more people now that climate change is an issue that is starting to be taken seriously.

The environmentally conscious owner purchased an electric car, and despite not using it all that much “you cannot plug an electric car into a terraced house, and this is something that local authorities need to address – as it is the way of the future”.

‘I’d like to start my own business in Ireland, but not by the back door’
4

Authentic and walk-in ready in Kilmainham for €625k
6

Shame-free sex education: It’s So Amazing! And only a little bit mortifying
7