Bijou scheme in leafy Glenageary with one beds from €425k 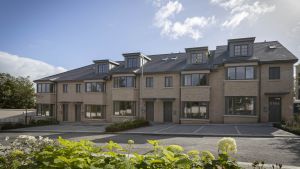 Feldberg is a smart, boutique-sized development of one- and two-bed apartments, three-bed penthouses and four-bed, three-storey houses, built on an infill site where Belgrove Homes bought two houses: a large property after which the new scheme is named and a smaller cottage.

In total it comprises 19 units of which five have already sold to persistent purchasers who closely followed the build’s progress.

At 170sq m/1829sq ft the four-bed terraced houses are sizeable. At hall level there is a bright, well-proportioned living room to the front with a large window washing it in light. Ceiling heights of 2.7 metres also add a sense of space. To the rear is a fine square kitchen with generous dining area and a separate utility of about 12sq m.

Large sliding glass doors with windows in the side panels by Carlson open out to decent sized gardens that are east-facing but also get southern sun and come with a granite-paved patio.

The accommodation is set on the first and second floors with three doubles on the first floor, one of which has a windowed shower en suite, and the master bedroom is on the second floor. This has a shower en suite set under the eaves and is naturally lit by a roof light. There is a separate plant room on this level that also benefits from natural light and could be used as a dressing room or home office. All the bedrooms have built-in wardrobes. The houses range in price from €825,000 to €850,000. One of the five has been sold.

The apartments are in two blocks of six and are over three floors. The site is sloped with garages at entrance level and the first of the one and two-bed apartments are set to the rear where they open onto terraces and look out to a handsome granite boundary wall.

The units are roomy. The one-beds extend to 65sq m/699sq ft and these are seeking between €425,000 and €450,000. The two-beds are 86sq m/925sq ft and seeking from €540,000 to €610,000. The most impressive of these is on the first floor where a south-facing balcony of about 7sq m overlooks a large public green space that Feldberg shares with the adjoining estate Glenageary Hall. These have impressive levels of storage, while the two-beds offer a separate, vented utility room – great for drying clothes.

There is one penthouse for sale. The three-bed unit extends to 135sq m/1,453sq ft and has views of the obelisk on Killiney Hill to the rear, where there is a terrace of almost 60 sq m, and great sea views to the front where there is a modern kitchen supplied by Nolans with quartz countertops.

At present the living and kitchen areas are set out in an open plan fashion but, subject to planning, the installation of some steel and glass internal doors would provide two separate spaces. Asking €960,000 this property offers a family a view-filled alternative to the typical homes of the area.

The brick-fronted homes have been designed by Paul Brazil & Associates, which also worked with the housebuilders on Knocksinna Wood, a Blackrock-based development of just 13 houses that launched two years ago.