Island escape off the Donegal coast. Just bring a boat... and water 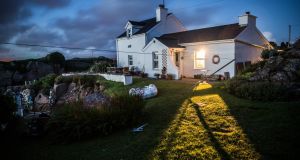 With everyone scattered to remote corners of Ireland for their staycation this year, many are rediscovering all that our great little country has to offer. Daydreams turn to escaping the rat race for good and moving to a place with sea views and fresh lobster and mackerel on tap. One new Donegal listing surely epitomises that escape. Duck Cottage is a former coastguard station built in the 1800s on Rutland Island, off the west Donegal coast.

The four-bed detached house comes with its own boat slipway and a deep water mooring for low tide use and is one of just 14 houses, all on the leeside of the island.

It’s a hardy proposition as the house has mains electricity but no mains water. You have to bring drinking water from the mainland or use the springs on the island, says owner Iain Webster, who harvests rainwater from the cottage roof for use in the bathrooms and kitchen, while a solar panel system helps heat the hot water. You won’t need a car either – there are no roads – but a boat is essential for making trips to the mainland for supplies.

“It will take a certain kind of person to buy it, someone who is not intimidated by the fact that if it’s stormy you might not get off.”

Webster, who is selling the house, is seeking €435,000 for it and says he has already had interest from a Hollywood producer, a former Chelsea footballer and a former ambassador, who have all made the journey out to view it. If a couple are interested, both partners will need to like it, he advises.

There has been a marked increase in interest for ultra-rural properties says Killybegs-based agent Rory Dorrian of DNG Dorrian. “Interest in get-away-from-it all homes always peaks in summer when visitors tinker with the idea of making a permanent move from the city. This season was different though in that we saw a four-fold increase in rural properties actually going sale agreed to a mix of Dublin and Northern Ireland buyers.”

The sitting room of Duck Cottage is located on the first floor to take advantage of the views back to the mainland and the night lights of Burtonport. Patio doors on the gable open out to a balcony and the room’s floorboards have been painted a soft periwinkle blue.

The main kitchen downstairs, is set around the old hearth and has an electric Aga cooker while two of the double bedrooms, also downstairs, have deep-set cottage windows, complete with shutters - ideal for those stormy days when you need to batten down the hatches. A single bedroom and an attic room with atmospheric shiplap panelling completes the accommodation.

Webster says a local fisherman will usually ferry him plus groceries and water to the mainland for a fee. The Arranmore Ferry Service, run by Dominic Sweeney, also says it can make a private stop at the island’s harbour, located just a few hundred yards from the property – subject to tides.