Collectables and curios from Bazaar days to auction 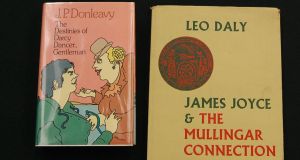 A selection of the books at Oliver Usher’s auction.

The contents from the former home of the late Jim and Miriam O’Donnell, who lived over their business, Days Bazaar on Oliver Plunkett Street in Mullingar, will be auctioned at the Oliver Usher sale on Monday, August 31st, at the Headfort Arms Hotel in Kells.

The O’Donnells ran Days Bazaar, which became a landmark bookshop in the midlands from 1973 until 2007, where they held a number of signings for both national and international writers.

Queues for signed copies of books by Gay Byrne, Dr Garret FitzGerald and Brian Lenihan were said to stretch the length of Oliver Plunkett Street during the couples’ tenure. Today Days Bazaar is run as a local cafe.

The O’Donnells, who passed away in 2018 and 2019 respectively, were heavily involved in the local literary scene, organising the launches of books such as The Boer War, The Scramble for Africa and Meetings with Remarkable Trees, by Thomas Pakenham, the 8th Earl of Longford who resides at Tullynally Castle in Westmeath. His Scramble for Africa, won the WH Smith Literary and Alan Paton Awards in 1991, with The Boer War taking the Cheltenham Prize in 1979.

The catalogue has over 650 entries covering a plethora of antiques, collectables and books. However, there are no photographs accompanying the entries so it is best to view in person – subject to social-distancing regulations.

Otherwise it is a case of trying to match the photographs on the website with the catalogue entries, which can be a tad confusing. The auction house says it is in the process of developing an online bidding platform, but for this sale it is still the ways of old, which could well mean there are bargains to be had. Bidding is in person, by email and through absentee bidding forms.

Since so many of us are still working from home, office desks and tables to be used as desks, have become quite popular at auction since the coronavirus took hold.

Partners desks, also known as double desks were first designed for English bankers in the 1800s. Senior bank officials would sit opposite each other at either side of the desks – each having their own separate drawers for filing and quite a bit of legroom.

Whether or not it is suitable or indeed possible to work opposite the person you live with, these – though large pieces of furniture – negate the need for a second office space for couples working from home, while also providing ample storage space in the drawers at either side.

As you would expect, there are quite a few books listed, most of which are signed first editions that include The Time of My Life by Gay Byrne (€50 - €100) and The Destinies of Darcy Dancer, Gentleman by JP Donleavy, also €50 - €100.

Along with watercolours from the 19th and early 20th centuries, the selection includes a pair of impala heads (€500 - €800) and mounted leopard skin (€200 - €250). There is also a good collection of chairs for dining rooms, libraries and comfortable fireside snoozes. See usherauctions.com

Yotam Ottolenghi: This crowd-pleasing pie feels like a big hug
6

What will the council look for when inspecting a rented property?
Real news has value SUBSCRIBE