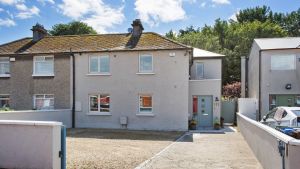 Just one block in from the Dublin Port’s old sea wall, Ringsend Park is a quiet cul de sac that has turn-of-the-century artisan dwellings on the seaward side and mid-century semis lining the other side. These back on to Ringsend Park, a sizeable green space with all manner of amenities including running tracks, football and rugby pitches, and a basketball court, which number 132 overlooks.

The house offers a suburban set-up but is just minutes from Poolbeg Yacht Club and a 10-minute walk to the hustle and bustle of Grand Canal Dock, its theatre, hotels, bars and restaurants. It has a sizeable front garden, now laid out in gravel where there is space to accommodate off-street parking for up to four vehicles.

The semi-detached property was bought by its current owner when he was still a bachelor, and rented out rooms to similarly-single friends. Now that he is married with two small children the property has been extensively remodelled to accommodate the needs of his family. It now measures 150sq m (1,614sq ft) and has four bedrooms and three bathrooms.

The house opens into a hall, with a boot room set up for coats and outdoor shoes, and has a separate office and downstairs guest WC to the left.

Past the stairs and to the right is the large, open-plan living kitchen which overlooks the back garden and is floored in a warm-coloured French oak engineered timber.

The U-shaped kitchen is set to the right of this L-shaped space so it doesn’t dominate the room. Yet there is ample cabinetry, all covered with quartz countertops to accommodate a family’s needs.

There is a walk-in pantry, stacked with every ingredient a cook’s heart might desire, with a utility adjoining it where there is a side door directly outside and space to air dry clothes out of sight.

The living area is set around a Henly wood-burning stove, and there is glazed access to the garden’s paved patio from here.

The rest of the garden is set out in lawn and abounds the park where you can hear the bounce of a basketball on the blue court to the rear. The space is absolutely private, although probably less so in winter, when the trees lose their leaves. Notwithstanding this particular seasonal difference, it does make you feel as if you’re in the heart of the countryside even though you’re only a block away from the East Link toll bridge.

There is a second living space to the front of the house, accessed via a pocket sliding door to the rear of the dining table in the kitchen, which offers a place for either the grown-ups or the kids to escape to.

Upstairs there are four bedrooms, three of which are good doubles and one single. The master has a windowed, ensuite shower room.

The property, which has an impressive B2 Ber rating, is asking €850,000 through agents Owen Reilly.

Enjoy some Halloween fun with this bewitching cake
7

Sinéad Burke: It’s never too early for children to learn to be curious and kind
8