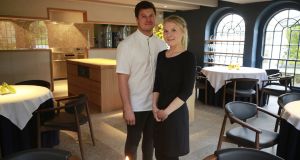 Aimsir, at Cliff at Lyons in Co Kildare, run by head chef Jordan Bailey and general manager Majken Bech-Bailey, has been named restaurant of the year in the Georgina Campbell awards. Photograph: Nick Bradshaw

Aimsir, a 24-seat restaurant in Co Kildare serving a tasting menu created using only Irish indigenous ingredients, has been named Restaurant of the Year 2020 at the Georgina Campbell Irish Food & Hospitality Awards.

Cornish-born chef Jordan Bailey and his Danish wife Majken Bech-Bailey opened Aimsir in May, having spent more than a year planning it and renovating a stone cut building which was formerly a cookery school on the Cliff at Lyons property in Co Kildare.

Finnish chef Mickael Viljanen of The Greenhouse, in Dublin 2, was named Chef of the Year, an accolade that was also bestowed on him at the recent Food & Wine online magazine awards.

Launching the awards, Georgina Campbell remarked on the contribution made to Irish hospitality by the late Myrtle Allen, and others of her generation, who she described as “the pioneers of the genuine hospitality, sustainable food sourcing and innovation that Ireland is gaining a reputation for today”.

However, she also warned about lack of training in the hospitality industry and disappointing standards, at the top end of the hotel market. “When carrying out our independent and anonymous assessments around the country, we have encountered disappointments once again, and particularly with some four- and five-star hotels, where there really should be no excuses,” she said.

“There is a worrying lack of a sense of hospitality in some cases and poor training– or indeed no apparent training at all – and it is baffling that there are still issues with standards at top establishments every year.”

Rising hotel prices were also flagged, and Campbell warned that Ireland was “losing the competitive edge that was so hard won during the recession.”

NEWCOMER OF THE YEAR
Winner: Killeavy Castle, Armagh
Highly commended: Restaurant Lady Anne, Kilkenny and No. 14 The Georgian House, Down