Book your passage to a European design fair

Forget fashion week, September is design season in Europe. Here are five city events worth travelling to this autumn 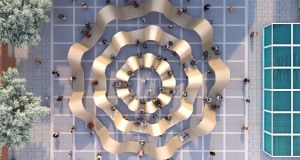 Paul Cocksedge’s Please Be Seated is part of the London Design Festival.

Bodkins to Brexit. Avoid the angry crowds in Parliament Square and escape instead to a world where soft furnishings trump hard borders. Apart from the scenes around Westminster, which look increasingly like a Breughel, you’ll find the entire city turned into an enormous gallery for the London Design Festival – taking place from September 14th to 22nd.

It’s packed with pop-up venues featuring dynamic and innovative design projects and last year attracted more than half a million visitors from more than 75 countries. Lord knows how many will be allowed in next year so maybe now’s the time to go.

Much of it is based around London’s Victoria & Albert Museum, that august repository of art and design, which is home to everything from ancient Chinese ceramics to Mary Quant miniskirts.

Since its launch in 2007, the festival has commissioned celebrated designers to create sensational temporary structures. The first was Zaha Hadid’s Urban Nebula, a polished concrete snakelike bench erected at the Southbank Centre.

There’s more seating this year, with British designer Paul Cocksedge’s Please Be Seated, a series of concentric circular benches you walk under to sit on at Finsbury Avenue Square. Expect even more benches, and cartoonish street furniture, at Walala Lounge, Camille Walala’s installation at South Molton Street in the West End.

If you’re as happy to listen as to look, check out the programme at the Global Design Forum, taking place at the V&A throughout the festival and including a series of ticketed talks, workshops and debates.

Get your house in order in Paris

It runs until September 10th, so you’ll need to be quick, but make sure to put in the groundwork first. With upwards of 3,000 exhibitors from all corners of the globe, you’re going to need to plan your visit with military precision.

This season’s Maison et Objet pilgrimage coincides nicely with Paris Design Week (through September 14th) so, even if you can’t get yourself a professional accreditation to get into the exhibition, you can still enjoy one of the world’s biggest design gatherings, with a programme of events aimed at interested amateurs as much as international professionals. Of particular interest is Le Off, its exhibition showcasing new design talent.

Paris Design Week is famous for its “promenades” – themed tours entitled “art & design”, “upcycling” and “work!”, the last of which brings together new ideas about shared workspaces. “Projet” is a tour of interior design professionals, while ‘savoir-faire’ is all about craft. There’s a “food design” tour as well, taking in restaurant concepts and stores specialising in the culinary arts.

Habitare for humanity in Helsinki

Head to Helsinki for Habitare (September 11th to 15th) the largest furniture, design and interior decor event in Finland. Last year, 56,000 people visited the expo, which focuses on young designers in particular.

The theme this year is “Mindspaces”, so expect lots of multi-sensory experiences. Participants will also explore the nexus between reality and augmented reality, and tease out issues around privacy, the circular economy and happiness.

The design fair coincides with Helsinki Design Week, the largest design festival in any of the Nordic countries. Some 170,000 visitors attended last year to explore fashion, architecture and urban culture.

The festival offers 250 events, including ones for both design professionals and the general public. It also includes Children’s Design Week. Events take place in museums, markets, seminar halls and “secret” shops, so it’s a great way to explore the city too.

Among the highlights this year is The Value of Clothing, an interactive fashion installation consisting of wearable pieces of art created by Dusty Marjut Uotila, which visitors can borrow. The aim of the exercise is to open up a greater understanding both of the process of making a garment and its real value.

Helsinki Design Week includes sustainable packaging projects too, looking at the urgent need to develop alternatives to oil-based materials such as polystyrene, as well as new ways of reducing wood waste in construction.

Keep it lit in Valencia

Valencia’s City of Arts and Sciences put what was something of a Spanish backwater firmly on the tourist map when launched in the late 1990s and early noughties. It has stayed there pretty much ever since, with Calatrava and Candela’s futuristic designs – an architectural complex that includes a giant aquarium, science museum and concert hall – in themselves reason enough to go.

If high fashion and cutting-edge design leave you feeling low and dull, make a beeline to Brussels instead. Brussels Design Market ( September 28th and 29th) is the largest vintage design market in Europe. Founded 15 years ago as a simple flea market, it has grown in size and stature, and is still devoted to furnishings made between the 1950s and 1980s. Once over the shock of realising that the 1980s qualifies as vintage, which means it’s well on its way to antique, you can embrace the nostalgia fest twice yearly – it’s on in spring too.

About 100 exhibitors and more than 7,000 visitors typically attend each event, which takes place in Sheds 3 and 4 of Tour & Taxis, Belgium’s best known venue. The fair is home to an eclectic mix of goods, with stall holders coming from across Europe and the UK.

Expect lots of ceramics, glass, metal, wood and Bakelite collectables, plus opportunities for iconic finds such as Pierre Paulin ribbon chairs and Frank Reenskaug rocking chairs. Shed 4 is the Expo Shed, where exhibitors set up full-scale showrooms. Shed 3 is a good old fashioned “brocante”. Both fill up with dealers, collectors and design enthusiasts as the entire event is a 20th-century treasure.