Is Cairn having a rethink on Stillorgan student accommodation scheme? 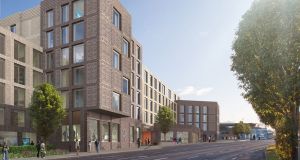 Cairn Homes secured planning in March 2018 for 578 student bed spaces and 103 apartments on the former Blakes site in Stillorgan.

It’s been two years since the listed homebuilder secured “fast-track” planning permission for the former Blakes restaurant site in south Co Dublin, and there’s still no sign of the 548 student bed spaces and 103 apartments it promised.

While The Irish Times understands the delay is due in part to ongoing discussions between the developer and Dún Laoghaire Rathdown County Council on the status of the section of the Old Dublin Road next to the 3.3-acre site, the speculation in relation to Cairn’s plan is intensifying.

When asked on Twitter if his comment was based on fact, Saul said simply: “No fact. My opinion. We’ll see shortly.”

The councillor’s instincts could yet prove to be on the money, however, given recent developments in the student accommodation sector across the capital.

Quite apart from the significant increase in the supply of bed spaces in Dublin city centre, Cairn’s proposed Stillorgan offering could face a two-pronged combination of competition and opposition from its intended target market at UCD.

In the first instance, the university has a €300 million plan to increase its on-campus student accommodation offering from 3,179 to 5,357 beds in the coming years. The other, and more immediate challenge for Cairn is student protests about rent costs for a bed space in the capital.

All of which may make it more tempting and ultimately more profitable for the developer to submit a revised fast-track planning application to An Bord Pleanála, seeking permission for a scheme comprising Build-to-Rent (BTR) apartments exclusively.

The temptation to pursue such a plan can only have been heightened by recent developments in Dublin’s private rented sector (PRS) market , and in the south Dublin market particularly.

Last December, US-headquartered real estate firm Kennedy Wilson secured planning permission for 232 luxury apartments on the site of the Leisureplex bowling alley immediately opposite the Blakes site, while more recently, Cosgrave Property Group agreed the sale for €210 million of 368 apartments at its Cualanor scheme in Dún Laoghaire. The price being paid by the German investor DWS equates to a heady average of €570,652 per unit. It doesn’t take a university degree to do the maths on that one.