Zero clutter, big skies: how these Irish downsizers got their dream home 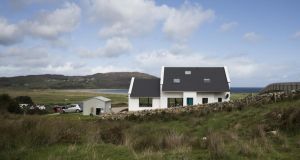 Jim Walsh says he and his wife Eilish have landed in heaven. The pair, who recently retired after spending more than three decades working and living in Dublin, are now the proud owners of a three-bedroom house overlooking the sea in Dunfanaghy, Co Donegal.

It was bought with planning permission (for a house which was already half-built), and the couple enlisted the help of their architect son to transform the space and showcase what they describe as the most stunning view imaginable.

“For 32 years we lived in Glenageary Lodge, Glenageary and we really enjoyed our time there,” says the retired sales executive. “We could walk to Dalkey and Killiney and it was a lovely place to bring up our children [Darragh and Laura]. But once we got closer to retirement, I started looking around at the older people in Dublin and I saw that life seemed to be too impersonal and moving too fast for the elderly – I felt sorry for them and I didn’t want to be that way myself when I got older.

“So I persuaded Eilish to think about moving to Donegal. She is originally from here – I’m a Tipp man myself – and we had spent countless holidays here over the years so we knew we liked it. I wanted a fresh start for us where we had space to breathe, time to relax and a community to be part of.”

With this in mind, the Dublin duo began looking for properties “up North” and while they initially hoped to buy a ready-to-live-in house, they eventually came across the site where their future home would be built.

“We looked for about three years and were disappointed again and again for various reasons,” says Jim. “Then we found a site that we really liked but it was far too expensive so we gave up on that also. However, a while later, we got a call from the agent, who had another site in the same area which was a much better price and actually had a better view – the only stipulation was that we had to use the builder who was selling it to develop the property and had to stick with the planning permission.

“We went to see it and fell in love with it straight away – so agreed a price and, subject to Darragh doing the designs, we made a deal.”

The four-bedroom house had already been built up to the first floor, but architect Darragh Breathnach (dua.ie) had big plans to transform the interior and make the most of its spectacular setting.

“We bought the site in February 2017 and moved in here in June 2018, so although Darragh took the whole inside of the house out and started again, the transformation was very quick,” says Jim. “He sourced huge windows which flood the place with light all day long. We also got rid of one of the bedrooms in order for the downstairs living area to be open right up to the Velux windows in the roof.

“The original design had small windows and smaller rooms, so it is very liberating having so much light and such incredible views. The proposed plan was also of a traditional style and it is now the opposite, with features such as the window frames recessed into the walls and the fact that we have no gutters or downpipes. This has caused much interest as people wonder how on earth we deal with the rainwater – which incidentally is dispersed by an overhanging roof which allows the water to just drop off.”

For some people, having new-fangled elements to their home may take some getting used to, but Jim and Eilish have no reservations.

“It’s an extremely modern house and although I’m 65 and my wife is somewhere over 50, we absolutely love it,” he says. “We must have always been a bit minimalist at heart because although our house in Dublin was crammed with bits and bobs, there is literally nothing on show here in Donegal. Our walls are bare and there isn’t even a picture of our children on display – basically we have a framed landscape from every window, looking out over Horn Head to the front with its ever-changing hues, and out the back we have the mountains and the sheep, who have quite quickly become part and parcel of our lives. I’ve taken to studying their daily habits – it’s fascinating.

“The downstairs part of the house was designed to be entirely self-contained so we don’t need to go upstairs at all apart from when we have visitors and go up to change the sheets and dust the two bedrooms. Other than that we spend all of our time downstairs and utilise all of the living space – which is wonderful. It is also very easy to keep the house clean and only takes about half an hour to have it looking spic and span.”

Still in the honeymoon period with their new home, they do admit to missing some aspects of city life – but say their new abode more than makes up for it.

“We definitely made the right decision moving up here as everything so far has been wonderful,” says Jim. “We have some lovely new friends and neighbours, we both play golf and are out on the course three times a week and as someone who wouldn’t take a bath unless it was piping hot, I have discovered the joys of swimming in the sea and am out there most days.

“Of course we miss our Dublin friends and family as well as the National Concert Hall and the Abbey Theatre. I miss my local GAA club and I’m sure Eilish misses the shopping and the restaurants, but what we have here is a very good trade-off.

“It was important to us to move at a time when we were getting a little too old for the busyness of the metropolis but are still young enough to enjoy our new life, our new home and the new community which has been so welcoming to us. If I was to die tomorrow, I couldn’t end up in Heaven, because I believe we are already here.”

Have you recently extended or renovated your home? We’d love to hear how you got on. Please email homeanddesign@irishtimes.com