What’s a cloffice when it’s at home?

Want well-utilised space and multiuse rooms? Then say hello to the office in the closet 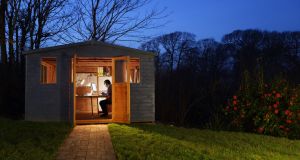 My sittingroom armchair was sacrosanct but the younger boy has begun to lay claim to it. Maybe I need to flee further, to a shed in the garden. Photograph: Getty Images

Cloffice is a terrible word but not a bad idea. The notion of an office in a closet is not immediately enticing; in fact it sounds like the work of the devil.

When you lift your head from toiling at a keyboard, you don’t want to have your gaze abruptly arrested by crammed shelves inches from your nose, or to be hemmed in by boxes of files, elbows tucked in to avoid knocking your mug of tea on to your phone. You want to lean back, stretch expansively and let your eye alight on a bright, airy work space with an agreeable view through a window.

By accepting this room as my own, I had tactictly acknowledged that the rest of the house was hers

This is why I like to write in a particular armchair in the sittingroom, legs extended, computer on my lap and in sight of two windows looking either up to the hills or down across the valley. The problem is I usually need to wear semisound proof ear protectors to dampen the high-tech battle noises from the Xbox. Designed for use with power tools, they largely succeed in muffling all but the biggest explosions. But they don’t stop the dog licking my ankles – nor do they deflect ricochets from the younger boy’s dartboard. So the idea of a cupboard of my own, however claustrophobic, is actually quite a fine thing.

Smart-home design thinking is currently all about efficiently utilised space and multiuse rooms: the office in the closet; a home gym in the spare bedroom; a games room in the garage. But our century-old two up two down cottage has nearly always been multifunctional. Some years ago we were visited by an old man back home for Christmas in Ireland. He had travelled from Birmingham – where he had lived since the 1950s – and was one of 16 children reared in our small house. There were no spare bedrooms in his day – never mind an en suite bathroom, or indeed any bathroom at all – and certainly not a spare inch of room for a cloffice. He talked of settle beds by the fireplace and his father’s coffin on the dining table. I imagine that was a common multiple use of space back then: the kitchen doubling as a funeral parlour.

The house had grown slightly when we first moved in 15 years ago. During the 1980s, a bathroom and sittingroom were added in a flat-roofed extension at the back. Having left a tiny flat in the city the pair of us finally had room to expand. I still smoked at the time and had declared a need for a designated space where I could indulge that regrettable habit. My wife suggested we call it the stone room – because the previous owners had stripped the render from the walls revealing the original rough courses of mixed granite, sandstone and crumbling mortar. It was stark but it was mine. I could smoke, write and, as she put it, “bash your bodhran, thrash at your guitar and howl away to your heart’s content”. Her phrasing rankled slightly but I agreed. I had a study and felt like a grown-up!

We had kids and my sole occupancy ceased

What I was slow to realise was that by accepting this room as my own, I had tacitly acknowledged that the rest of the house was hers. I had been outmanoeuvred with great finesse but her subtle victory was short lived – as was my personal domain. We had kids and my sole occupancy ceased. The spare room became the boys’ room and guests now stay in what was once my private space. They sleep on a cunning, Scandinavian yoke that folds away to make a day bed that is ordinarily buried under books, coats and schoolbags and guarded by boots, a piano, a chainsaw and overflow from the kitchen cupboards. My desk is similarly camouflaged with piles of household paperwork, a saxophone and assorted sports gear. Come to think of it – the stone room is the paradigm of a multifunctional space. Unfortunately there’s no longer any room for me.

Those early attempts to create separate spaces have long been abandoned. I’ve given up smoking so that excuse is gone and now every corner of the cottage is multiuse. The kitchen, already overworked, is also used for homework; the bathroom is where the older boy puts in his required hours of teenage “alone time” and the sittingroom continues to shrink. My armchair was sacrosanct but the younger boy has begun to lay claim to it – there could be battles ahead. Even my luxury wellies are under threat. Apparently the older boy believes he has rights to them when I’m absent. I no longer even have a boot of my own.

Maybe I need to flee further, to a shed in the garden. I could write without distraction. I could lift a weary head, relax a furrowed brow and let tired eyes rest on a soothing view. If accused of selfish wastefulness I’ll run out a power line, install a minifridge full of beer and claim the space is multiuse.

Philip Judge is currently on tour in the US with the Abbey’s production of Two Pints by Roddy Doyle. His book In Sight of Yellow Mountain is published by Gill Books