The biggest reason why first-time buyers can't afford a home?

Mortgage approvals are rigidly hooked to earnings, but house prices in some areas are increasing at nearly five times the rate of wage increases 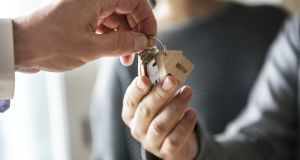 In 2017 the Central Statistics Office published a report, Historical Earnings 1938-2015, showing changes in earnings from before the second World War to the present day. It makes for very interesting reading, and shows that since 1998 average earnings have grown by a little more than 1 per cent every year. This 20-year trend has had a significant impact on affordability for first-time buyers. Will our children ever be able to take that first step? How difficult is it to get on the property ladder now compared with 20 years ago?

Today, an engineer with a similar level of experience could earn a salary of €55,000 annually. A second-hand four-bed home in Bray now costs €440,000. This price represents eight times a single salary and means that two full-time incomes are required to purchase this home. As the average age for first-time buyers now is 34, this couple will both be working until the age of 59 before their mortgage is paid off.

Looking at various locations and occupations, the results are broadly similar. In 20 years, wages have increased by 22 per cent while commuter-belt house prices have increased by 155 per cent (these figures are before adjusting for inflation). House prices are increasing at seven times the rate of wage increases. Higher rents also mean it’s taking longer to save for deposits, buyers are older and two full-time salaries and/or significant equity from parents is required to buy a home.

We know that housing costs are a driver of wage inflation. These new figures and costs have a number of knock-on effects in Irish society. Two people will be required to work longer and more than likely commute further distances daily in order to own their own home. As a consequence, children are likely to be spending long days in childcare, and it’s possible two family cars will be on the road. Not a very sustainable future in many respects.

Currently there is only one truly affordable housing scheme being built in the State. The Ó Cualann Cohousing Alliance, in partnership with Dublin City Council, is building a scheme in Ballymun of more than 30 dwellings where three-bed homes are priced at €219,000. To qualify for the scheme, prospective purchasers must earn below €59,000 as a single person or below €79,000 for couples.

These upper limits are above-average earnings, and many people, including nurses, gardaí, teachers and other professionals, are eligible to purchase these homes.

It would appear that officialdom to date is not interested in looking beyond the traditional speculative developer-led model to other types of delivery, such as co-operatives, to provide affordable homes on State land. But these latter models are well established here and internationally and have proven to deliver real affordability for buyers.

Typically there are just two ways to tackle housing affordability – either reduce costs or increase wages. We are already seeing increasing industrial unrest in tandem with significant wage inflation.

Recent lowering of standards and reduction in the size of homes has not reduced prices. Cost reductions in the housing sector of the scale needed to bring affordability require significant State investment and planning – the market cannot deliver this on its own.

Mel Reynolds is an architect, policy analyst and contributor to Passive House Plus magazine

‘We treat surgery as kind of icing on the cake’
8