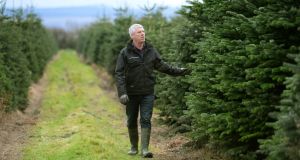 Christmas tree farmer, Martin Kelleher says the part of growing Christmas trees he enjoys most is selling them to the public. From December 1st to 23rd, the Kelleher Christmas Tree farm outside Brannockstown, Co Kildare will – like many other Irish Christmas Tree Farms – offer people the chance to come and select their own tree and have it cut down on the spot to bring home.

The Kellehers bring a horse and some sheep and goats in pens for the children to see on their visit.

“When we send Christmas trees off to garden centres for sale, we don’t get any feedback but when people come here, I can show them the different types of Christmas trees, which makes my job more enjoyable. Some people spend a couple of hours walking through the Christmas trees and then they call us and we’ll go up and cut down the tree they want,” he says.

Martin Kelleher has been growing Christmas trees full time on the 50-acre farm since the late 1980s. His father, Denis Kelleher – a retired professor of forestry from University College Dublin – first bought the land in the 1970s and started growing Christmas trees one acre at a time. Darragh Kelleher, Martin’s eldest son currently also works on the Christmas Tree farm.

Initially, the Kellehers grew Noble Fir, a dark green variety of fir tree that originates in the west coast of the United States. Now, as tastes have changed, Martin Kelleher grows more Nordmann Fir, a variety which originates in the mountainous regions of Turkey and Georgia. Some Irish Christmas tree growers also grow and sell Norway Spruce and Lodgepole Pine. Lasio Carpa and Korean Fir are more unusual species of Christmas trees also grown in Ireland.

“Ireland is a very suitable country for growing Christmas trees with our mild winters although this year, we lost about 90 per cent of our newly planted trees in the drought which will mean we’ll have a shortage in about seven years,” explains Kelleher.

Christmas trees are grown from seed in little pots for the first year after which they are planted in an outdoor nursery for another two years. Then, they are moved to their permanent plot where they continue to grow for another four to seven years.

The trees are planted in March, pruned in July and cutting starts in November. They are sprayed just after they have been sown to stop weeds germinating and again in October to kill the nearby grass, nettles, docks and thistles.

“Wholesalers look for perfectly straight trees, and we mark out the ones for cutting according to their size. The Nordmann Fir are bushier than the Noble Fir but the Noble lasts longer, smells better and has stronger branches. We also sell foliage for wreaths – especially from the Noble Fir because it holds its needles and smells better,” explains Martin Kelleher.

Once indoors, Christmas trees should be placed on a stand with water in a cool part of the house, away from direct heat.

The tradition of bringing evergreen trees indoors in winter time pre-dates the birth of Christ. But the practice of decorating Christmas trees started in 16th century Germany. Martin Luther is credited with illuminating a Christmas tree with candles to celebrate God’s glory reflected in the stars.

The tradition of bringing Christmas trees indoors in this part of the world dates back to Victorian times when Prince Albert, German-born husband of Queen Victoria, brought the tradition to England.

In Ireland, it wasn’t until the 1940s that bringing evergreen trees indoors at Christmas time became widespread. Until the 1970s, the tops of Norway Spruce trees – cut off when the trees were felled for timber – were brought indoors as decorations. As the tradition grew, these smaller trees – which shed their needles – were replaced first by Noble Fir and latterly by Nordmann Fir.

A few years ago, a Canadian study compared the environmental impact of real Christmas trees compared with artificial ones. And while artificial trees scored poorly because they are made of oil-based plastics and metals, are manufactured in Asia and then transported to Europe for sale and are not recyclable, keeping one for 20 years gave it a comparable carbon footprint to buying a real Christmas tree every year for 20 years.

Denis and Martin Kelleher are adamant that real Christmas trees are not only nicer to have but a better choice for environmental reasons. “I get upset when people say plastic trees are better for the environment, because the plastic in them will end up in the ocean and take 200-300 years to break down. Whereas this entire 50 acres of Christmas trees is a carbon sink as it stands, and as we cut down trees, we replace them,” says Martin Kelleher.

Denis Kelleher says that real Christmas trees take carbon out of the atmosphere and at the end of their life, they are turned back into mulch. As a founding member of the Irish Christmas Tree Growers Association he adds, “you wouldn’t give your dearly beloved a bunch of artificial flowers for their birthday so it isn’t appropriate to use artificial Christmas trees at Christmas time.”

Choose and cut your own Christmas tree

If you find it monotonous to buy your Christmas tree from your local superstore or garden centre every December, consider visiting a Christmas tree farm to select a tree from hundreds of others grown especially for the festive season.

Here are some Christmas tree farms where you can go to buy Christmas Trees straight from the forest: