The battle for the future of the Iveagh Gardens 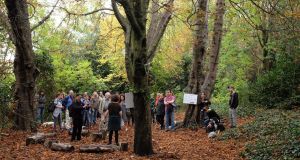 Supporters take part in a ‘Save the Iveagh Gardens’ in Dublin. Photograph: Derek Speirs 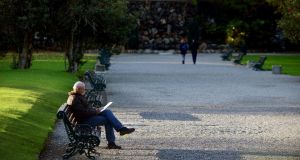 The Iveagh Gardens lie hidden in plain sight at the very heart of Dublin, around the corner from St Stephen’s Green. Even in spring and summer, there are no spectacular bursts of colour, except the lovely rose garden, and that area is discreetly tucked away off the main paths.

So, on a dull October day, with the wind tearing still-green leaves off the trees, these gardens hardly beckon the stranger in. The locals, however, know better, and once you cross the threshold, you are likely to come back, again and again.

Despite the unwelcoming weather, there is already a fair scattering of visitors at 11am. As lunchtime approaches, a free bench becomes a rarity.

For the large working population in nearby offices, the gardens are obviously a much appreciated sanctuary. For people living in the south city centre, they are often a cherished and essential part of their lives.

The actor Pom Boyd has lived in the Iveagh Trust flats, 10 minutes’ walk away, for more than 20 years. Throughout that period she has walked almost daily in the gardens, always with her dog, often with her husband and children.

“I believe that city people have a right, and not just a right but a need, to reconnect to nature near their homes,” she says. “Our flats have no gardens, so this place is like a lung to us.”

She feels the Iveagh Gardens have a unique character, an atmosphere of calm and seclusion, that can’t be found in other city-centre parks such as St Stephen’s Green, more obviously beautiful though these may be. And she passionately believes that this special character is seriously threatened by a plan to build a children’s science museum between the National Concert Hall and the park’s eastern edge.

It baffles Boyd that the Office of Public Works (OPW), whose dedicated gardeners serve the gardens’ Victorian design so faithfully, has endorsed this plan, and that An Bord Pleanála has approved it.

She recognises that a children’s science museum is badly needed in the city. But she has launched an online and on-site campaign against the way its proposed location impacts on the gardens. She objects in particular to the removal of a high boundary wall, and of an adjacent semi-wild area including many mature trees, to create a patio for the museum.

On paper, these losses may seem acceptable costs, if the benefit is a new children’s institution. On the ground, however, Boyd can make a strong case.

She walks me from the entry off Harcourt Street, around the edge of a sunken open area that looks like a huge tennis court. It is, in fact, an archery green, dating from the gardens’ creation in 1863. The amateur archers are long gone. Today, families bring small children there, happy to let them race around freely, because its steep sides deter any quick escapes.

“This is one of the safest places in the city for children,” says Boyd.

The perimeter walk, lined with holly, sycamore, oak and lime is pleasant and leafy, though marred at one point by the unpleasing backside of a neighbouring house. City sounds are muted, but still penetrate the trees.

Turning the corner, however, there is a quietly dramatic shift in atmosphere. The wall separating the gardens from the concert hall is exceptionally high. Boyd says it is part of the original design by the landscape architect Ninian Niven, complementing the 1863 International Exhibition buildings at Earlsfort Terrace, where the NCH now stands.

However, the OPW’s Ciaran O’Connor, State Architect, tells The Irish Times, that it was added later, and that Niven’s plan linked the exhibition buildings and the garden directly. Thus the OPW would actually be restoring Niven’s work, not desecrating it, in his view.

Either way, though, the wall today undoubtedly creates an effect of seclusion that is exceptional in the city.

This atmosphere is amplified by the ditch-and-mound that runs inside the wall, and by mature woodland that forms a belt beyond the mound. The woodland is just ample enough to create an impression of wildness. No, this is not pristine nature, but it’s a good enough facsimile.

We find a circle of log seats, evidence of the active “forest school” that attracts children weekly. Someone has very recently put nest boxes high on the trees above the circle. Boyd says a nearby bat colony feeds around the woods, and a raven and a sparrow hawk have been spotted here recently.

Though no formal environmental impact study has been undertaken, O’Connor says “there is no significant loss of biodiversity”. He adds that the trees, which are obviously quite mature, “are only seedlings”, and again, not part of Niven’s plan.

Most of the woodland area would be swept away if the museum patio plan goes ahead. When you walk through, it becomes obvious that the proposed changes would radically affect the whole gardens.

Instead of being an enclosed parkland, the space would become the exposed backyard to another institution. It’s easy to imagine the pressures that would develop to prettify the whole area, in ways quite alien to Niven’s historic design. And it’s hard to understand why the children’s science museum can be located only here.

Boyd claims that the OPW’s initial brief, and the conditions for an EU grant it received for the gardens, include a commitment “to conserve the internal and perimeter vegetation to screen out adjacent office blocks and buildings”, will be violated by the plan.

O’Connor says Boyd is confusing issues here: “The character of the garden will not be undermined by the OPW design. Iveagh Gardens will continue to be a green sanctuary within the city.”

Clearly, a lot of people disagree. Boyd launched an online Uplift petition a year ago to retain the wall and the woodlands. It received 10,000 signatures in four days, and has now reached almost 18,000 names.

Friends told me it was the only place with a waterfall in Dublin. It’s a cool little spot, hidden away from all the hustle and bustle.

I work in the city centre, and always meet friends here for lunch. Stephen’s Green is always packed. This is much more chilled.

I work nearby, and come here daily for the sound of water, for the space, it’s nice and calm.

This is a bigger green space than any in Malta, where I live.

It’s quieter, more private, and you don’t hear the traffic.

I come for the peace and the beauty, and especially for that waterfall, on a sunny day it’s as good as the Diamond Falls in St Lucia in the Caribbean. I love the walled garden area too, with the maze and the roses. As soon as I walk in here and hear the water, I know I have a special half-hour to myself.