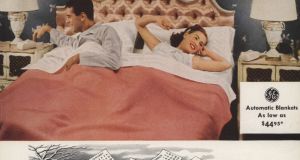 “Enjoy the comfort of a prewarmed bed,” urges the ad for General Electric’s new automatic blanket in the 1930s. There had been rudimentary - and heavy - electric blankets for some decades before US engineer and inventor George C Crowley, a GE employee, invented the first thermostatically controlled blanket. It promised “Warmth without weight” and, available in a range of colours, trimmed in satin, it quickly became a popular wedding present. SI Russell’s earlier, one-temperature electric blankets were heavy - and considered dangerous - and were mostly used in the 1920s and 30s in sanatoriums. The GE blanket was definitely domestic. It was some time before Crowley’s invention was marketed as an electric blanket - although consumer electronics companies were busy devising new appliances for the pre-war boom in housebuilding in the US, there was something about electricity and sleep that made buyers nervous. Crowley’s employer GE - who owned the royalties to his invention - gave him its highest award in 1949 saying he had shown “outstanding ingenuity . . . in the design and development of a control circuit which made possible considerable advances’’ in blanket quality.