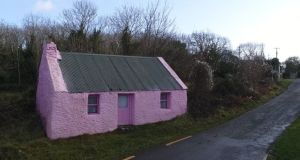 A tiny traditional cottage overlooking a lake on the Wild Atlantic Way in Co Clare has come on the market for €65,000 – and its candy-pink exterior is attracting just as much interest as the low-sounding price.

The two-room cottage at Mortyclogh, about 1.5km from the popular village of New Quay, with its seafood cafes and nearby Flaggy Shore, hasn’t been lived in for more than 50 years, according to its selling agent, DNG Brian MacMahon. But as soon as it was posted online, last weekend, potential viewers began calling, and the property has been trending on the MyHome website ever since.

The owner of the cottage is also selling a neighbouring business, Burren Craft Shop, which is priced at €250,000.

According to MacMahon, the cottage was given a facelift before going for sale but inside its stone walls are untouched and the entire house needs complete refurbishment. However, that it is still standing, and sits on just over 0.25ac, make it valuable from a planning perspective.

“Planning is so difficult to come by around here that something like this is going to be popular,” says MacMahon.The cottage is likely to be entirely refurbished or even replaced by a far larger home, he says.

The area is popular with tourists, whose numbers have multiplied since the branding of the coastline as the Wild Atlantic Way.

“We’re absolutely flooded with tourists. Whoever came up with that name is a genius. It’s just fantastic what it’s done for the area,” says MacMahon, who warns that both properties need substantial investment.

Across the road, and looking out on to Ballyvelaghan Lough, Burren Craft Shop sits on a similar-sized site, of about 0.27ac. The property consists of an open-plan shop, fitting room, storeroom and toilet. The shop could be upgraded to a cafe, subject to planning permission.

About an hour’s drive from Shannon Airport, and roughly the same from Galway city, New Quay is a small village in north Co Clare situated between Kinvara and Ballyvaughan. Its famous Flaggy Shore walk, and the popular Linnanes Lobster Bar and Russell gallery and cafe, are just minutes away.

There is a choice of beaches, one just a stroll from the house, where locals swim every day of the year, and one en route to Ballyvaughan, Bishop’s Quarter, with its high dunes.

The coastal village of Kinvara, 10km from the cottage, has supermarkets, bars, restaurants, primary and secondary schools and a wide variety of sporting clubs. It also hosts music and maritime festivals each summer.