Living it up in the basement

Once occupied by kitchens and cellars, the basement is now seen as valuable extra living and leisure space 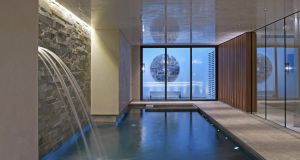 Basements were once meant for staff, cooking and wine, but these days, people are increasingly looking down rather than up for options.

“If this room was in Hong Kong, it would be premium space,” said my friend when she walked into the children’s playroom in our basement, which was in much need of an overhaul. She had recently moved to Europe, having lived in a compact sky rise apartment and, with her fresh perspective, I quickly stopped complaining about the lack of light and ancient bars on the low sash windows and decided to take advantage of the space instead.

Feeling inspired, I re-read one of my favourite books, Storage by Terrance Conran. This wonderful book is all about making the most of every inch of your property and this mantra is sweeping faster than ever across city dwellers who have ticked the loft conversion box and are now keen for more space – be it for teenage kicks or beloved outlaws who come to stay but occasionally.

Once upon a time, basements were chiefly meant for staff, cooking and wine, but these days, with the rise of the “multi-story” townhouse, people are increasingly looking down rather than up at their options. I was brought up in a three-story Georgian house and I can remember the damp, spooky air of the basement, with heavy doors, dark wood and comparatively small, barred windows with cobwebbed shutters. However, my father had radical ideas and with the swoop of a huge front-end loader caterpillar, the bank to the rear of the house was clawed away to reveal a basement wall surrounded by a path of cobble stones and green algae.

The difference was incredible and immediate – a breath of fresh air an understatement. Light blasted into the original kitchen, the exterior heavy wooden doors were exchanged for glass and, with the exception of the cellar, each room received quality, natural light for the first time since its construction over 200 years ago.

The kitchen was duly renovated with a reconditioned Aga, a large oak table and (for reasons of economy, and working with what you’ve got) 1970s kitchen units were installed. The only downside (from a cooking point of view) was that our various animals tended to wander in from the rustic garden. A Shetland named Grundy was partial to my mother’s brown bread and, lured in by the aroma, when the coast was clear he’d take chomps from the corners of several loaves of bread cooling on a rack. Another regular was Milly, my sister’s most beloved goat, keen to have her daily chew on a tea towel hanging by the Aga, along with the peacocks wandering in for reasons of a curious nature, completely unintimidated by the dogs.

And let’s not forget Jasper the Jackdaw, who had an attachment to my father from when the infant bird was rescued following a fall down the chimney pot. All of course very entertaining to us children, though perhaps less so to the tribal elders at the time, but boy did all the antics make the basement a friendly, welcoming space.

Conran has all kinds of tricks to bring extra light into a basement, without having to resort to burrowing out the earth in front of the building. He suggests “mirrored storage” such as cupboard doors with mirrors on the front, and to knock down the walls of small rooms to create “barrier-free spaces” in order to “take advantage of the naturally expansive nature of the basement to create an updated modern style that promotes community”.

The heroine of my new book Infidelity has plenty of adventures in the basement of her family’s houses in both London and the Irish countryside. Her mother threatens to dig two floors beneath her Notting Hill townhouse, in order to keep up with the Joneses next door by installing a gymnasium, swimming pool and cinema, meanwhile in Ireland, Elodie Gold (my heroine) finds solitude in the basement during times of great heartbreak.

As children are staying at home for longer, buildings need to adapt accordingly, and so you may be inclined to re-think your basement, perhaps knock four rooms into one large one, take out the ceiling and expose the roof beams to create a bright space. Put in an open fire at one end and a huge sofa at the other, and Bob’s your uncle (and even better, if he does come to stay, you’ll have a place to escape to).