120 luxury apartments at Hanover Quay, have come to the rental market. Two beds will cost from €3,700 whilst penthouses are expected to command a five-figure monthly sum according to Carysfort Capital, owners of the development. 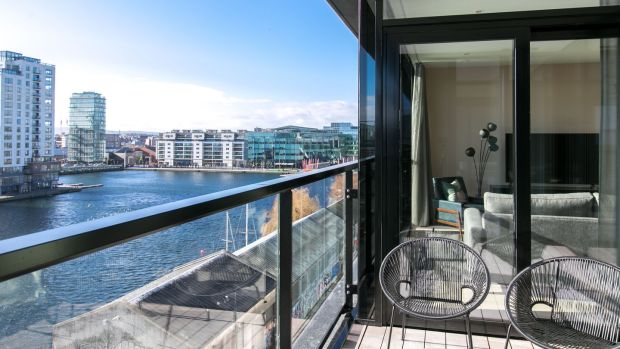 The accommodation at Opus on Six Hanover Quay has been hotly anticipated since it made headlines last year after the develoiper Cairn sold the entire building in a single lot to Carysfort Capital for €101million.

It marked the latest deal in the fast-growing private rental sector (PRS) market where institutional investors are snapping up the hottest new schemes for rental to young professionals in the heart of the capital’s fast-growing business district.

Located on a prime site in Dublin’s Grand Canal Dock, across from the Bord Gáis Energy Theatre, the waterside scheme follows on the heels of Capital Dock which launched in February, commanding an average two-bed rent of €3,500-€4,000 per month. Opus launches 120 apartments to market this week, and Michael Looney, managing director of Carysfort Capital, says a quarter of the units have already been pre-let to a mix of individual and corporate tenants.

The majority of the apartments are two beds and expected to command a rent of €3,700 per month through letting agent Savills. Prices for the penthouses, which include a 2,845sq ft four bed, have not yet been set, but are likely to command five-figure monthly sums. Carysfort is hoping to attract young professionals currently working in the docklands with a service package designed to entice “fun-loving, time-poor” professionals.

Set across four blocks rising to seven and eight floors, 54 of the apartments have south-facing water views, 11 come with their own roof gardens and all units have balconies and floor-to-ceiling windows. Looney says that the focus of the launch will be on the two beds, and because not all can enjoy roof gardens and water views there will be a couple of communal courtyard and rooftop spaces where residents can gather.

The 464sq m (5,000sq ft) downstairs restaurant space has been leased to Paddy McKillen jnr’s Press Up group, setting an early hipster tone for the resident profile. The new McKenzie’s restaurant will deliver to apartment dwellers through the Opus app, and a point-of-sale unit on a shared terrace will allow residents order meals to the rooftop. On the same terrace there will be barbecue facilities, beer taps and a fridge for outdoor guest entertainment. With the Aviva Stadium, 3 Arena, Bord Gáis, and city on the doorstep it’s a pretty exciting living prospect for a professional.

As for the apartments themselves the fact that this building was designed originally with individual re-sale in mind means everything is a little more generous than for the usual PRS offering. Floor spaces are bigger with good ceiling heights, lots of storage and plenty of light pouring through walls of glass. “We reckon these are about 25 per cent bigger than the average PRS unit, our two beds are about 1,021sq ft and the three beds around 1,622sq ft,” says Looney. Certainly they feel bigger and brighter than many city-centre apartments.

Looney estimates around €20,000 has been spent on the fit out and finish of each unit and with underfloor heating, Bauformat kitchens by Design House and bespoke furniture commissioned by a designer and delivered by House and Garden, the overall feel is one of luxury.

Looney adds that each resident can access a range of concierge services through the Opus app including parcel collection, laundry and dry cleaning, house keeping, theatre tickets, green fees and the use of two shared Lexus hybrids. There are 98 parking spaces and basement lock-up storage.

Carysfort Capital is an Irish-owned and managed investment platform, and Six Hanover Quay is its highest-profile venture here to date.

Last month Carysfort paid more than €34 million, excluding VAT, for a portfolio of 102 newly-built houses at the St Edmund’s development in Palmerstown, Dublin 20, bringing its overall holding there to 262 units. It also owns hundreds of apartments and houses in schemes across Dublin, Kildare and Galway.