Glasses, grabbers and shirt buttoners: great design is for life

Universal design aims to be accessible to everyone, whatever their age 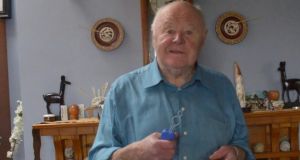 Four NCAD students made a prototype button fastener for Tom, above, who has rheumatism

Earlier this year I got glasses. They’re life-changing. I can now thread needles and do other exciting things such as read newspapers and menus in restaurants. My slightly failing sight is to do with getting older, but this time the trauma of recognising that I’m not as young as I was has been offset by the very beautiful design of my new glasses (thank you Optica).

Not all steps on the path to being over the hill are as easily smoothed as that my now-beloved glasses. Until recently most objects aimed at the elderly, from mobility aids to medical devices, were mainly made in beige. They shared, for want of a better word, an orthopaedic look, which contributes to the sense of ageing as an illness and a disability, rather thank another of life’s stages.

Things are changing, and the universal design movement, which champions good design that is accessible to everyone, whatever their age, stage, shape, size or ability, has resulted in a plethora of products that, in their own small way, are life-changing.

Take, for example, the Good Grips range from Oxo. Including everything you could dream of for your kitchen: from pepper grinders (€30), to can openers (€18.50) to pizza cutters (€15, all from Debenhams); the Oxo philosophy creates items that you would love to have in your home and that are also easy to use even if your vision, grip or strength isn’t what it used to be.

At the Centre for Excellence in Universal Design (universaldesign.ie), Ger Craddock picks up on the same idea: that by including all potential users in design, you can create a product that is both aesthetically pleasing and fundamentally easy to use and understand. “The best example,” he says, “is the Ford Focus car.” He describes how the group of designers used a “Third Age Suit” to simulate the physical limitations of an elderly person.

“The suit, which restricts the wearer’s movements, allowed for insights that were implemented in the car’s design. The Ford Focus became the best-selling car in the UK and Ireland for a number of years, without it being marketed as an old person’s car,” says Craddock.

As the Ford Focus shows, you don’t have to be of limited mobility to benefit from some innovations. A number of years ago, one of those long-handled grabbers came into our lives, and I quickly developed considerable dexterity with it. Handing out full cups of tea was soon banned, but the ability to reach for a biscuit without having to move from a lounging position became something to be cherished.

As well as creating products that are universally accessible, the best designers also come up with solutions to those daily niggling problems that so many people endure without realising things could be different. Take plug-in door-chimes. These quick and easy kits – such as the Wireless Twin Portable (€35.95 from ie.screwfix.com) – let you hear your doorbell from any room in the house, reducing a huge source of anxiety for people whose hearing is fading.

So what else would we like to see dreamed up? A juicer that doesn’t require too much pressure, a gadget to let you button up your shirt if your fingers have become fumbly . . . But wait – designers are already working on that one. The Design and Crafts Council of Ireland partnered with Fixperts (a network aimed at inspiring problem-solving around the world, fixperts.org) to support four NCAD students – Aaron Nooney, Aidan Judd, Ally Morehead and Marie Kelly – through the Future Makers programme in 2016. Their project was to make a prototype button fastener for Tom, an older person with rheumatism. The result, a hand-held hook gadget, transformed an upsetting and difficult process into something that could be done with ease.

Sometimes universal design is a question of stripping back, rather than adding in. Simple, large buttons on gadgets are far more intuitive than the more usual bewildering array of ant-sized options. At New Old, a pop-up exhibition exploring design for older people, held earlier this year at the London Design Museum (designmuseum.org), design firm Future Facility created the Amazin Apartment installation. Appliances in the apartment were pared back to their most simple, functional form. Anyone who has gazed in perplexity at their new washing machine would fall in love with this exhibition’s single-knob version. While technology can help: from accessibility settings on your smartphone, to the ability to bring up the font size on your Kindle; the key is to keep the interface, or the steps to getting there as simple and as short as possible.

Finally, just occasionally it can be good to keep some beige in your mobility aids. A friend of mine eschewed his gorgeous ebony and silver walking stick, preferring the version the hospital had given him. Why? I wondered. “Because when I use this one, people are more careful around me,” he replied. He’s right, of course. Design sends signals through colour and shape, but wouldn’t it be wonderful if we could all be careful around one another anyway? You never know what challenges someone else may be carrying.

Hilary Fannin: Will you help send these Irish children back to school?
Real news has value SUBSCRIBE